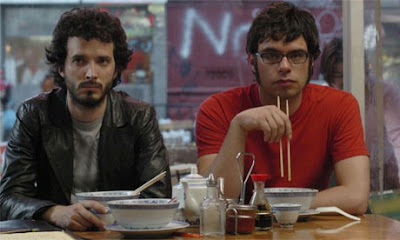 The Best...
1. "Flight of the Conchords": When I first watched this, I figured it was a toned down "Tenacious D". Both were about acoustic duos with inflated self-images, on HBO. I thought it was humorous, but nothing stellar. I kept watching and it really grew on me. Based on my watching the full season on DVD four times in a row, I'm now convinced that these two deadpan losers were the funniest things on TV in 2007.
2. "Dexter": I didn't think that this show's solid first season could be topped, but they did it.
3. "The Shield": Wow. This is the best - and most intense - drama on TV.
4. "It's Always Sunny in Philadelphia": This is included if only because it introduced the term "bang maid" to my lexicon.
5. "The Sopranos": Tony and company strongly rebounded from a very mediocre previous season (too many dream sequences), but are docked a couple of spots because of an all-too-abrupt series finale.
6. "Curb Your Enthusiasm": Not as funny as it has been in the past, but still better than most comedies out there. Larry David's "shut the fuck up" to his secretary in the season capper may be my favorite TV line of the year.
7. "South Park": "Naggers", Muslim terrorists, the homeless, Bono's feces...this show is still the most adept at handling topical humor.
8. "Entourage": Not much progression in this show from season to season, but it's a fun ride. Ari and Lloyd are my favorite on screen couple right now.
9. "The Knights of Prosperity": This David Letterman-produced mid-season replacement had all the quirk of his earlier canceled-too-soon show "Ed." Maybe it wouldn't have gotten the axe if it had kept it's original title: "Let's Rob Mick Jagger" (the aging Rolling Stone did a hilarious parody of himself, btw).
10. "The Sarah Silverman Program": Come for Sarah's un-PC hijinks, stay for Brian Posehn and Steve Agee's gay couple next door.
11. "Big Love": Having only seen bits and pieces of the first season, I got sucked into this show. And considering that it stars Chloë Sevigny, that's quite the compliment.
12. "Penn & Teller: Bullshit!": The weakest season yet, but their presence is still necessary. The Wal-Mart episode was the best of this run.
13. "Californifornication": It was a bit off-putting seeing Mulder in a sex comedy, but there was just enough nudity and humor to keep me watching. Bonus points for the ridiculous lawsuit brought by the Red Hot Chili Peppers.

Special Mention: "24" Oh, how the mighty have fallen. Here's hoping the extended break can reinvigorate Jack Bauer. (The same goes for the gang over at "Heroes".)

Note: I wonder about how critics assemble these year-end TV lists, as they always include shows that haven't finished their seasons. What if those shows started strongly but then sucked in their latter half? Or vice versa? Because of that I did not include any programs that straddled the line of the calendar year, which means there's nothing from the '06-'07 or '07-'08 seasons (or whatever's left, due the strike). Every show in the list began and ended its run in 2007. So no bitching about me not including "30 Rock" or "The Office", mmkay?

Email ThisBlogThis!Share to TwitterShare to FacebookShare to Pinterest
Labels: Best of, TV

yes, i'd like to bastard a complaint about the absence of the office or 30 rock on this list.

I'll direct you to the Complaint Department. It's down the hall and to the right.