Rambo by the numbers 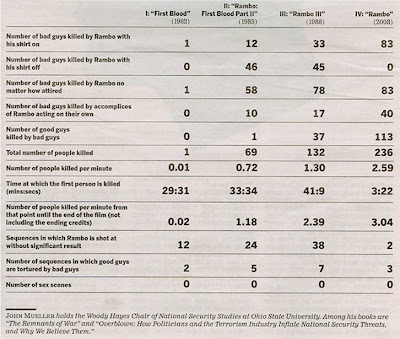 And I thought that I had a lot of free time.

As for Rambo, it was hyper-violent...and awesome. Sure, the acting was pretty bad (and the CGI blood a bit distracting), but it was what it set out to be: a Big Dumb Action Flick with a little slice of message (the whole Burma thing) on the side.

The past week has been quite Stallone-y for me, as I took in three Rambo movies and Rocky Balboa. It's been over 20 years since I last saw First Blood and I forgot that it is actually a good movie. Even Stallone's tearful monologue at the end choked me up a bit. I'd also not seen Rambo: First Blood Part 2 in quite a while. I knew it was a Big Dumb Action Flick, but this is King Big Dumb Action Flick. Stallone chokes a snake! (Uh, literally, not figuratively) Tonight I may watch Rambo III for the first time.

Seriously, though, Stallone is pretty underrated as a writer/director and I'm interested to see how Sly's Edgar Allen Poe movie turns out. Yo, nevermore! For now I'll just patiently wait for Demolition Man 2. I'm sure that Wesley Snipes could use the money.
Posted by Micah at 1:33 PM

Sandra Bullock could use the money, too.

You are fined one credit for a violation of the Verbal Morality Statute.