Let me tell you, that only made the bees *more* agitated.

"He that hath a beard is more than a youth, and he that hath no beard is less than a man." - William Shakespeare 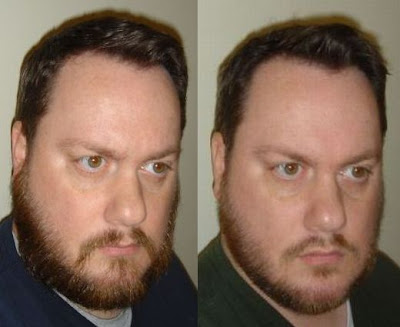 I've been growing my winterbeard out for about three months now and, while I must confess that I look totally bitchin', I realize that I'm a bit too grizzly. See, except for my mustache* and one long, freaky bone-white hair sprouting from my chin, I haven't trimmed my beard at all. It got to the point where it started to curl. Not really wanting the Odysseus look just yet - I'm saving that for when I retire - I decided to clean myself up.

Figuring that it was my patriotic duty to stimulate the economy, I went to Bubba's Barbershop a few days ago and had one of the fine gentlemen who work there give me my first ever professional beard trim. The guy took a lot off, but at least now my face looks nice, neat, and presentable. Like a pair of freshly-pressed slacks.

Usually, I keep my winterbeard until Spring Break (Easter), when I have Fun With Facial Hair Week at the beach. But I think this year I'm going to keep it indefinitely. I'll probably rethink that decision come summertime, when the ungodly Virginia heat and humidity will have me wanting to rip it out at the roots with my bare hands. 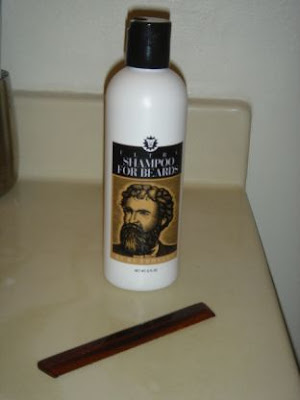 In other beard news, right before the big trim I bought a new bottle of beard shampoo (this one by Beardsley) and a sweet tortoiseshell beard comb. Unlike my last bottle of shampoo, this one has a fruity smell to it and I'm not sure if I like that better or not. But it does the job and is a third cheaper yet twice the size of the Bluebeard stuff.

As for the comb, it won't be of much use until my winterbeard soon turns into a springbeard.

*How do people tolerate eating with those things? And having the flu, for that matter?
Posted by Micah at 3:27 PM

Email ThisBlogThis!Share to TwitterShare to FacebookShare to Pinterest
Labels: grooming

I believe your patriotic duty is simply to pay your taxes. What's the number of that IRS website again?

Mine is coming off in a couple of weeks. I grew mine out over the summer and it was not too bad. The Missus said that 'it stinks' in the summer but I could not smell any odd odors. But I am going to be a 'Fall Foliage' kind of guy and regrow next fall.

Did you bother washing it...daily?

My thinking now is that I may chop it all off when the hellish climate of August sets in and then take a month or two break. That way I still kind of keep my annual "winterbeard" tradition.

It looks like you lost 10 pounds in the after picture. MUCH better in my opinion. (not b/c of the slimming effect either)

Sheeeit, you ain't got a real job or a woman; Fun With Facial Hair Week should last at least a month.

Also, you should grow mullet.

Mags - Yeah, that's what my mom said. Thanks! A woman that's not into the unkempt, homeless guy look? Go figure!

SBN1 - Unleash my inner Danny McBride? Uh, not yet.