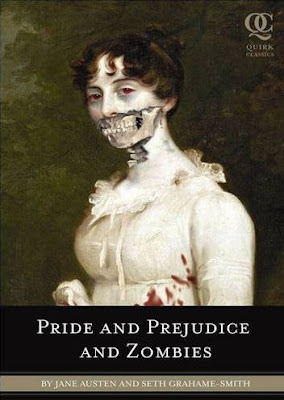 Pride and Prejudice and Zombies: The Classic Regency Romance - Now with Ultraviolent Zombie Mayhem! has quickly shot to the top spot of my Summer Reading List. Eat hot lead, undead Mr. Darcy!
Posted by Micah at 11:32 AM

and of course i guess this makes me obliged to read it when youre done. okay, i accept.

Of course! By the way, have you read Thank You For Smoking yet? It's worth a look.

no i havent. but like you i have a reading pile a mile high. i'm still in the middle of 'uncle toms cabin' and a book on wine and you just brought over those two others. gimme space, man.

hey we're celebrating the oscars tonight...watching 'man on wire' (best documentary) with pizza if you wanna come by tonight.

Tempting. While I don't have much interest in the subject matter, I am curious about the doc due to the near universal hype its received. (I still really want to see The King of Kong, too.)

But I think I'll pass. From Laura's Facebook status, it sounds like she's still sick and I don't want to get sick (again). Also don't want to pass germs onto Grandma when I visit her tomorrow.

How are you feeling? Heard you were the last of us to get the flu. Impressive that you held out this long.

i'm mostly better. laura's infernal snoring kept me up half the night so i'm really sleeeeeepy. but i'm fine.

'king of kong' wasnt nearly as good as the hype, i thought. 'king corn' on the other hand, was. probably a third to a half of what we watch are docs. ever have a question, come see me.

Let me know when you screen a doc that has copious amounts of bewbs and 'splosions. Those are the kinds of movies that I like.

you didnt miss much, doc wasnt that great. funny that won, i could name bunches i thought were much better done. it was like 80% re-enactment/dramatization, which to me is pretty cheesy. ahh, what do i know.

pizza was good though, i tried this new frozen pizza dough i found recently and i'm switching to that from now on, realllllly good.

then watched the last episode of LOST from the first season. and still in bed by 8.30. not a bad night.

i sold my soul and took that summer UR job yesterday. it would take a LOT of money for me to give up my summer, but thats what they offered. i feel like a painted whore.

we probably werent going to hilton head anyway this year, but now its official.

Did you grill the pizza? I'm going to try that this spring.

Wow! I never thought I'd see you give up your precious summer. But if I'm can't work for my dream employer, I'm glad you are. Hook a brotha up!

Is Laura working this summer? If not, what about just her and the boys going down to HH? You'd be missed, though. I'm not totally certain about myself going, either. But I'm like that every year.