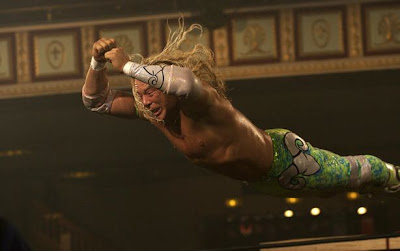 The Wrestler: Quite simply, this is Mickey Rourke's triumph. His performance was excellent, eliciting much sympathy with his failure to let go of his glory days. And Marisa Tomei goes above and beyond as an aging stripper. I can't recommend this extremely moving film enough.

Paul Blart: Mall Cop: It's not high art. Heck, it's not even all that hilarious. But it's harmless and sometimes you just want to see Fatty make a funny AND land the cute girl, you know?

In Bruges: I really enjoyed this story of two hitmen laying low in Belgium, awaiting their next job. Colin Farrell was surprisingly emotive (this may be his best work; Sorry, Daredevil), Ralph Fiennes was humorously menacing, and Brendan Gleeson once again fails to disappoint. It's up for Best Screenplay at this year's Oscars. It's a shame that it has no chance.

Dan in Real Life: Based on the trailer, I wasn't expecting much, but this movie ended up surprising me. It's much more of a drama with some funny parts than a straight-up comedy. Maybe I'm just a big softie, but the scene with Steve Carell singing "Let My Love Open the Door" (especially the slowed-down last verse) to his brother's girlfriend really got me. Nobody plays the sad sack better than Carell.

Hulk vs.: HULK SMASH PUNY WOLVERINE AND THOR. CARTOON MORE VIOLENT THAN EXPECTED. HOPEFULLY, THIS FIRST DVD OF MANY.
Posted by Micah at 11:08 AM

Ah, Daredevil. The best part about that movie was that I got to see it in the theatre and did not have to pay for it.

While not great, Daredevil gets a bad rap. Farrell is obviously having fun as Bullseye. I hear that the director's cut improves the movie somewhat, but I haven't seen it.

I blame Daredevil in part for my animosity towards Ben Affleck. That and Bounce. Ugh.

(I own both of those DVDs.)

I like Ben. Not a great actor, but he's got a good sense of humor about himself. At least, that's how he portrays himself on Kevin Smith movie commentaries and such.

I have just installed iStripper, and now I can watch the hottest virtual strippers on my taskbar.