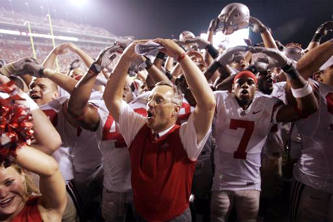 [sigh] One of these days I'll go to a REAL football school. Or more specifically, I'll go to a school whose football program is good WHILE I'M THERE (e.g. Richmond well after the Jim "Run in up the middle again" Marshall days).

Then again, MSU does have some of the best sports riots in the NCAA. I think we're ranked 2nd behind Maryland. College GameDay won't even come here any more after Spartan fans pelted the commentators with trash every time they mentioned Notre Dame (this was a few years ago).

I bet it's nice to go to a school where a good percentage of the students at least care about the athletic program. And you get TV coverage.

But you're right: you can't beat a good riot, be it caused by ethnic tensions or a local sports team's win or loss.

Yes, East Lansing is probably behind only South Central LA and College Park, MD in couches-burning-in-the-street per capita and atmospheric tear gas parts per million. It's science.

But yes, being in a place like this does have its ups (basketball season) and downs (conference football season...which is kind of like being a Redskins fan...how do you lose to the FUCKING VIKINGS?!?!?...they outgained us in yards, 3rd down conversions, and sexual misconduct charges).

When the ViQueens won, they got a free boat trip on Lake Minnetonka. There was a lot riding on the game!

This free boat trip will probably NOT end in Prince feeding them pancakes.