Quick movie reviews: three films my brother said I had to see 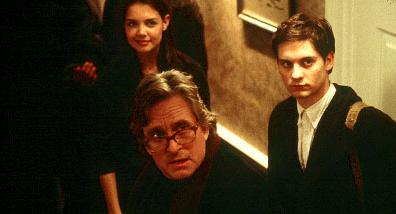 "'Spells'? Jesus, James, you make it sound like we're in a Tennessee Williams play. I don't get 'spells.'"

After I revealed that I had never seen the following movies - three of my brother's favorites - he lent them to me. My thoughts:

Wonder Boys: Sure, the title makes it sound like gay porn...but it's even better than that. I really dug this movie, about a pot-smoking writer/professor (Michael Douglas), his editor (Robert Downey, Jr.), and a talented but depressed student (Tobey Maguire). A stolen car, a transvestite, a dead blind dog, a long-delayed follow-up novel, and Marylin Monroe's wedding day coat all play a part in the hijinks that unfold over a wintery weekend in Pittsburgh. I liked this film so much that I went out and bought a used copy ($5!) at Blockbuster. In fact, I'm watching it again right now. Definitely check it out. And see if you can spot "It's Always Sunny in Philadelphia"'s Mac in a non-speaking role.

Vanilla Sky: I was prepared to hate this one, since all I've ever heard about it was negative. But I liked it. Not as much as much as Wonder Boys, but it still left a positive impression. As with all Cameron Crowe movies, it has a great soundtrack.

Magnolia: This one I didn't really care for. I recognize that it is a well-made film and there are some great performances, but I just found it depressing and meandering. Aimee Mann's songs are used to great effect, though.
Posted by Micah at 10:03 PM

Wonder Boys is a truly great flick and an even better book, and you're right, Magnolia just blows big chunks

no mention of katie holmes' absolute hotness in your wonderboys review? good lord, you MUST be gay.

sorry that was from me, not "anonymous"

i mean katie holmes is no scarlet johansson, but COME ON.

Are me and my crew the only people that enjoyed Magnolia?

I guess you've never been struck by lightning either.

Thumbs up for (pre-TomKat) Cutie Holmes.

CW - I actually thought the red cowboy boots were a turn-on. Nowadays, the manipulation by that Xenu-phobe Tom Cruise is a turn-off.

And you're right - she's definitely no Scarlett Johansson. Any movie she's in automatically gets a thumbs up (among other things) from me.

THSE - Well, my brother likes it. I respect the cock, though. (TC probably gave his best acting job in that flick)