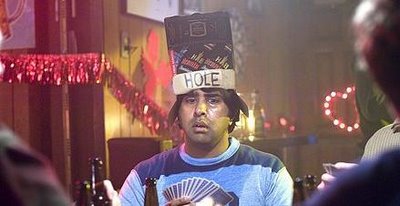 "Why don't we get you out those wet clothes and into a dry martini."

Beerfest: I love a good R rated comedy. And this is one: lots of drinking, cussing, and boobage. Freakin' hilarious.

The Da Vinci Code: Critics gave this a severe beatdown, but it was actually pretty good. Though it was dumbed down - and the source material ain't literature to begin with - at least the words "sacred feminine" were only used once or twice (as opposed to it appearing in the book about 500 times). What's scarier than a murderous albino monk? Tom Hanks's hair.

Cars: I am a Pixar junkie and while it had all of the qualities you'd expect (top notch animation, decent story, lots of humor), this is probably my least favorite of the films that they've put out. Maybe it's because I'm not a car guy or NASCAR fan. Or maybe it's because I despise Larry the Cable Guy. It's still a good flick, though.
Posted by Micah at 10:29 PM

An R-rated comedy with Jürgen Prochnow and humorous references to Das Boot? Count me in.

"Now, I don't care who you are. That's funny right there!"

What made that movie great was that after "Club Dread", I was expecting another disappointment, by Broken Lizard really came through. And Cloris Leachman put on her finest performance since taking over for Mrs. Garrett in "Facts of Life."

"I shleep better vit a little sausage in me."

spydrz - Please refrain from quoting LtCG on this blog. He only serves to reinforce tired Southern stereotypes (and those inbred, slack-jawed yokels eat his schtick up, unfortunately). Thank you.

dubin - You know, after the "Eye of the Jew" scene, I turned to spydrz and said "dubin would love this movie". I was going to e-mail you about it this morning.

I haven't seen Club Dread, but I've only heard bad things. I'm sure I'll still check it out someday, though.

It was like the 2nd day of school. We went to a double-feature (in lieu of studying). I don't even remember what the first one was.

Even though I had to leave reality and my beliefs at the door...

But I'm not planning on taking the Da Vinci Code tour in London...

dubin - I am so proud of you right now.

KtG - Yeah, if you go in knowing it's not real, it was an enjoyable flick. Somehow, the handful of protestors outside the theater didn't get that (they were there when I saw Clerks II; I saw DVC at the second run theater a couple of weeks ago with nary a troublemaker in sight).

The tour would be cheesy, though.

OK, I made the cardinal mistake of going to see Beefest on a Friday night on an island that does not have a shopping mall in which the pathetic "I want to be from Compton" island kids can go to impress each other with their fake, Chinese-knockoff bling. Having said that, I did get the satisfaction of standing up, turning around, thanking them all for talking on their cell phones and being assholes througout the whole movie and then telling them that "I will be drinking beer within ten minutes and thinking of you little fuckers. HAHAHAHA!"

But as for the movie, I can't call anything that mirrors my own life so much anything but AWSOME! I swear there wasn't 30 seconds of that flick that didn't uncomfortably remind me of somethign stupid I've done...

And Spyd, I tell you, I think I was the only one in the theatre that had SEEN das Boot before. God what a good reference.

At the risk of being ostracized here, I took a girl to see Larry live once. She went out with me after that. Damn.

Beerfest so made me want to go drink.

I think I was the only one in the theater (out of four) who understood that Prochnow was that actor.

George - We'll just call you Landfill. My buds and I taalked about goint to Saipan. We'll see if it ever pans out.

spydrz - Me, too. Can't wait to get the DVD and a case of Red Stripe.

My god, I just realized, I AM LANDFILL!!!

Jesus, were those guys following me around when writing that thing or what???

Seriously, get your asses out here. I will show you a life to which you would quickly grow accustomed and never return...

Do you have a twin brother that can step into your role (no questions asked) if you die?

As for the trip, all that's left is raising funds, co-ordinating schedules, and general planning. It should only take a matter of years.

How long are you going to be over there?

That question assumes that I'm ever coming back. I've just been admitted to practice in Guam too, so it looks like I've permanently relocated. ;)

Heh, two of me, are you kidding?

As for the last question, who says I'm ever coming back to the "mainland." Hell, I just got admitted in Guam, so I'm pretty much staying out in this neck of the woods. Micronesia is great. You should move out here. Lots of opportunities for guys like us. Lots of LBG's (Little Brown Girls) looking for a sugar daddy too. ;)

I hear you got admitted to Guam's bar. Congrats. Did you find a proper war bride yet (not some other expat)?

Guess the mainland has really lost George. A tear...