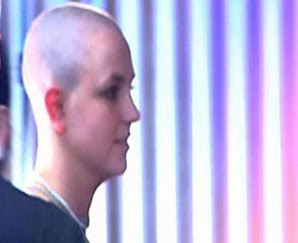 maybe it's a tribute to Sinead O'Connor or Ripley from the Alien movies?

Just one request Brit, get your whole head in front of the shotgun.

I thought it impossible, but I care less about something than I do about the fate of Anna Nicole's fortune.

I fully agree Micah. Right when I first saw this I said the same thing. I think a return to the days of the catholic school outfit and bubble gum pop are out the window.

Oh yeah, why no posts about the Grammy's? I do understand it was holy terrible, but you couldn't even point that out. Are you slippin' on your bloggin' man?

SB#1 - I don't see her ripping up pictures of the Pope or hanging out with Newt, so I'm going to have to speculate that she's gone bat shit insane.

Fraley - I know I've said it before, but you can take the girl out of Louisiana...

Funny enough being a music geek and all, but I've never cared about the Grammy's. Actually, reveling in such geekery is exactly why I don't give those awards a second thought: rarely do they recognize excellence in music. Check the year end critics' polls (not that they are infalible) and then look at the Grammy winners - rarely is there overlap. Usually, they are given out based either on sales/airplay, or politics (*cough*Dixie Chicks*cough*)..and then there's the long-overlooked artist awarded late in his career for a sub-par effort. "Meh" all around. The only awards that matter are the Micah World Best Ofs.

(Yet, the Oscars share all of the above flaws and I watch those. Go figure.)

this just in, Britney's entered rehab.

more from someone who gives a rip.

And what's up with the rampage she had with the umbrella?

Rehabe? Rampage? Man, I'm behind in my Britney news.