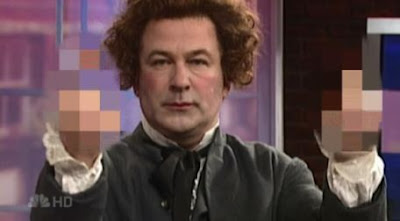 "America, which I invented..."

The gods of television really smiled down upon us this Easter week. I can't remember there being such great programming since the halcyon days of TGIF. In the past 5 (and future 2) days we've had (will have) the following:

"24" - Okay, not the strongest start. After all, this is shaping up to be the show's worst season. But Jack Bauer is like comfort food. Very intense comfort food.

"Heroes" - Granted, I haven't watched it since it took a break in '06 (it's in the same time slot as Jack), but it is no doubt up to something good. (I plan on getting caught up either online or through DVD)

"South Park" - An Easter-themed show spoofing The Da Vinci Code. Any episode centered on Randy Marsh is tops in my book.

"The Shield" - Oh, man. It's finally back...with a whopper. Shane gets suicidal. A house is full of dead bodies. Kavanaugh plants evidence against Vic. Spoiler alert!

"The Office" - A hilarious return to form for my favorite show currently on the air. This episode was on par with those of the stellar second season. Dwight Schrute. Pepper spray. 'Nuff said.

"30 Rock" - The best new show you're not watching. "Boy it's crazy to think we used to settle questions of panternity by dunking a woman in water until she admited she made it all up. Different time, the sixties."

"Penn & Teller: Bullshit!" - This week's show: "Breast Hysteria". As if this series didn't already have plenty of gratuitous boobage.

And then there's the Masters and opening week for baseball. Golf and baseball...my two favorite sports to nap to. And that's a compliment.

Movies on TCM: Dead Poets Society, Seven Samurai, and The Bad News Bears. The only thing missing is Ben-Hur.

And I agree...Randy Marsh is the show's most underrated character.

"Science is whatever we want it to be."

and you should have stuck with Heroes; 24 is beyond stale now.

Like a woman who keeps coming back to an abusive relationship, I keep watching 24, even as it goes waaaaaaaaaay over the top...and the acting is terrible.

dubin - Yeah, that was so...wrong. "Eric Cartman can never find out about this." Ha ha ha.

reg - Jack Bauer didn't give me this black eye. I...fell down the stairs. You don't know him the way I know him. He loves me. It was my fault.

I gotta catch up with The Shield. I missed the season premiere. Who knows what The Commish is up to?!

dubin - Although I still lurve "The Sopranos", the past few seasons have been sliding overall. "The Shield", on the other hand, has just increased in quality over the years (I did miss the entire 3rd season, though). Ergo, it is the Best Drama On TV.

And c'mon: referring to Michael Chiklis as "The Commish" is so 1994. He now prefers to be called "The Thing" or "Ben Grimm".

HE'LL ALWAYS BE THE COMMISH!!!

I gotta go with spydrz on this one.

The Best Week Ever for TV continued this eveing on ESPN. NCAA Hockey National Championship Game:

Congratulations! Are they buring cars in celebration in East Lansing?

That reminds me that I failed to put that basketball game in my original post. Guess I just put it out of my mind.

Well, we would have burned cars and all, but the town cleared out for Easter weekend, so the police locked up their tear gas. What's a riot without tear gas, right?

30 Rock was magical this week! There have been several times when I've found it even funnier than The Office. Everyone should be watching it!

dubin - Well, if it's cold down here in VA, it surely must be chilly up there. You could've at least set some car fires under the guise of "keeping warm". Tsk. Tsk.

srah - I definitely agree. Sure, "The Office" is my current fave, but I think that they set the bar so high last season that it is hard for it to continuously meet that standard. "30 Rock" was hilarious right out of the gate, IMO. Regardless, NBC should be given mad props for reestablishing truly Must See TV on Thursdays. To think that night used to be filled with craptacular sitcom after craptacular sitcom. Thanks for stopping by!

Awww, come on. Rioting's just not the same without all the frat boys--with their long, greasy, disheveled hair and their backwards hats.

And yes, it's been snowing on and off for the last few days. Thanks, Al Gore!

Remember, Dubin, Algore has some "theories" that "prove" that snow in April in Michigan is caused by your car, and you should expect your government-issued bicycle soon. Nancy Pelosi will be by to take your car away.

I hear Nancy's arriving in Detroit on the 7:34 flight from Damascus.

Thank you for "enlightening" me on "Al" Gore's "theories." I will be much "more" conscientious about my consumption of fossil "fuels"* from here on "out."

*Is it wrong that I go to archaeological sites, steal precious fossils, and burn them for fuel?

If you can get fossils to burn, then more power to you.