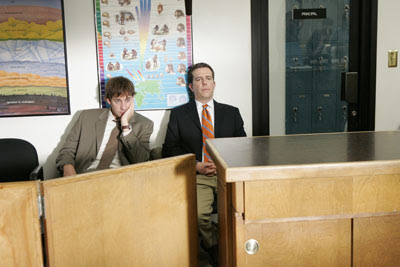 The office is in crisis mode when a large shipment of Dunder-Mifflin paper accidentally gets sent out with an obscene watermark.

I didn't watch the Office, I liked it better when it was in BRITISH. I meant to watch that 30 Rock show after the hilarious ad where Alec Baldwin is chastising his daughter for not returning a call or something, I couldn't STOP laughing.
I did remember to watch Scrubs though.

Michael's apology video session had me dying. Also, Dwight-as-Jim was even funnier than Jim-as-Dwight.

I love the blog that you have. I was wondering if you would link my blog to yours and in return I would do the same for your blog. If you want to, my site name is American Legends and the URL is:

If you want to do this just go to my blog and in one of the comments just write your blog name and the URL and I will add it to my site.

wooly - "30 Rock" is almost as funny as Kramer's stand-up act (now that's comedy). "Scrubs" is on the decline, IMO. It still elicits some chuckles, but it's not hi-lar-ious like it used to be.

reg - Yep, in the impersonaton battle, Dwight clearly won. Funny thing is that he looked "normal" as Jim. Creed had more lines in this ep than he's had the whole series. And I love the reference to Threat Level Midnight.

david - I think I've seen you post here before. I'll consider it.

"I like ice cream. I need a boyfriend." "Alligators. Dingo babies."