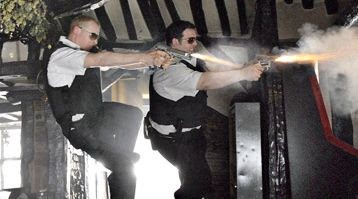 "There is no way you can perpetrate that amount of carnage and mayhem and not incur a considerable amount of paperwork."

Hot Fuzz: As Shaun of the Dead is one of my all-time favorite movies, I was expecting greatness from Team Pegg/Wright/Frost's follow-up. And I got it. This was a very funny movie, winkingly packed with pretty much every cop movie cliche. Best of the year, thus far? Yep.

300: Another winner. Critics contend that this movie - filmed mostly in front of a greenscreen - is like watching a video game. Maybe, but it's still a spectacular visual experience. Lots of carnage and nekkid womens. And it angering up the blood of the PC folks is just icing on the very bloody cake.

The Lives of Others: This Oscar winner for Best Foreign Film is excellent. It has it all: great direction, tight script, great performances, anti-Commie message. Go see if for no other reason than to be able to say the director's name (Florian Henckel von Donnersmarck) during cocktail party conversations.

Ghost Rider: Sure, the trailer looked terrible. But if you go in expecting a mindless comic book movie with surprisingly good special effects, you won't be let down. It was an enjoyable (albeit LOUD) way to spend a Saturday afternoon. Plus, Eva Mendes' exquisite cleavage was on display in pretty much every scene that she was in.

Reno 911!: Miami: I love the show, but this big screen adaption just seemed like a 90 minute episode. Funny, but more of the same.

Breach: With this movie Chris Cooper pretty much cements his place as one of my favorite actors. A tension-packed spy movie that curiously contains not much spying.

Casino Royale: Much better than I had expected, but I miss the smirking Bond of old. And I still maintain that Daniel Craig looks more like a Bond villain than 007. A note to filmmakers: card playing on screen is not nearly as exciting as you think it is.
Posted by Micah at 3:43 PM

I agree about Casino Royale. They dragged that card game out waaaaay too long. I didn't think Craig was all that bad a 007, but no one will ever be Sean Connery....except Sean Connery.

You're the man now, dawg.

Yeah, Craig actually did a decent job. But a blonde bond?

That chase early in the movie (that ended at the African country's embassy) was excellent. A co-worker said that that should've ended the film and I tend to agree.

The "parkour" or whatever it's called is the "art" of jumping from building to building. Invented, obviously, by the French.

it's all the rage on college campuses throughout the US, according to one reliable source (Time magazine - which means that Mad is sure to follow).

since i don't play cards (i don't even know how to play any variation of poker), i thought maybe i was the only one not sucked into the most tedious thing to hit espn and major network "sports" programming since golf (and WORSE, omg). thanks for not making me feel like a loser.

Nobody even mentions the Fuzz. It was bloody brilliant my son.

300 was good, but the South Park parody was more heartfelt.

The Lives of Others was not seen by myself nor anyone else in the world besides you. But that chick's name is funny.

Sure the Ghost Rider trailer WAS terrible. But it's important to point out that the movies was HORRIBLE too.

Didn't see Reno 911 or Breach, but I did see Casino Royale, and I liked it fine. Yeah, they never did top that opening stunt though. To learn more about Parkour, the french art of jumping off stuff, visit your local liberry.

spydrz - I think I'll pass. I like to keep my feet on the ground (while reaching for the stars).

jasdye - Yeah, I don't really get the fascination with poker. Well, I get that it could be fun to play (I've tried; I suck), but not watching it on TV. The only thing that'll get me to watch is if celebrities are playing it. And even then I lose interest.

wooly - Did you see Ghost Rider? No? Then you can't judge, my friend. Nic Cage was on fire! I apologize for not identifying you as the "co-worker" that I mentioned in my post.

But...I DID see it. I'm pretty sure I mentioned it...and did my awesome Nick Cage impersonation revisiting the comedy gold that WAS the Head on Fire thing.