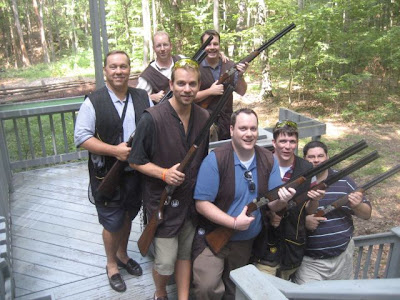 During our first afternoon off we shot sporting clays. We were each given a 12 gauge shotgun and 50 shells, and shot from four different stations. 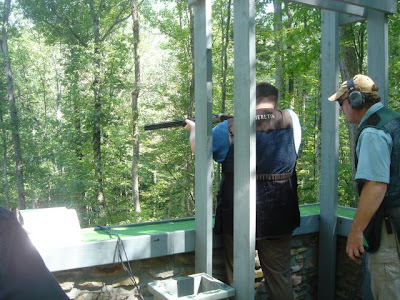 Curiously enough, it was my first time ever firing a gun that didn't require BBs or flying disks. I had a blast and am considering buying a boomstick of my own someday*. 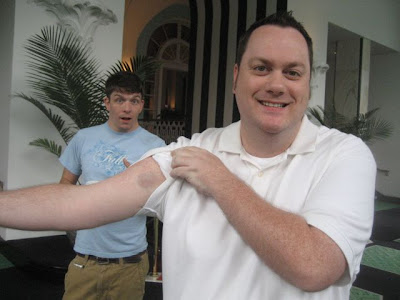 I got (and currently still have) a memento from our afternoon - a wicked bruise. Yes, for most of the time my shotgun was properly set firmly on my shoulder, but the last station we shot from was like Shock and Awe. Birds and rabbits were furiously coming out of everywhere and, already kind of sore, I just quickly fired my 20 shells with wild (but safe) abandon.

*Plans will be accelerated out of necessity if an Obama administration comes to fruition.
Posted by Micah at 9:23 PM

Email ThisBlogThis!Share to TwitterShare to FacebookShare to Pinterest
Labels: travel

Cool Beans. The best bachelor party I have ever been to was at a trap range set up like a golf course. You rode a cart with a shotgun rack on the back. Was very fun. Would like to shoot around here but A) don't have an appropriate shooting iron & B) Don't know if there are any good ranges here in RVA.

The other night my dad - who does shoot kind sorta regularly - was telling me of a place around here. But I forget where it was. I'll try to find out for you.

Or my brother, who was also privy to the conversation, can chime in if he remembers.

the US economy will be dealt a crushing blow next month. civil unrest will ensue. get your shotgun and ammunition now.