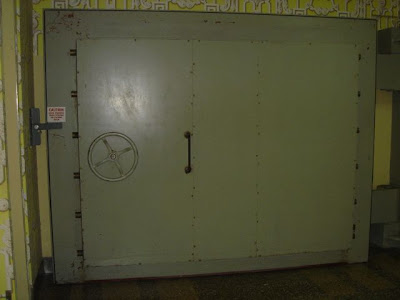 Shortly after arriving on Sunday afternoon, we took a tour of the secret Cold War-era bunker underneath the Greenbrier, which was built to house Congress in the event of a nuclear war. It was exposed in 1992 by the Washington Post*.

Unfortunately, photography was not allowed except for at the very end of the tour, so the only snap I got was the one above. There's a panel that would slide over the blast door to conceal it from unsuspecting guests of the hotel. The "hiding in plain sight" construction of the bunker was pretty neat.

While you'd think security would be tight due to that whole "no photography" rule, you'd be wrong. Several times during our folksy guide asked the last person in the group to "close the door and make sure it's tight while I continue with the tour" (including the front entrance). Then there was the whole "if you don't want to go downstairs, just wait up here and we'll be back shortly" thing. And who could forget the "we're not allowed to go in that room, but go ahead and poke your head in if you want" part of the tour?

Email ThisBlogThis!Share to TwitterShare to FacebookShare to Pinterest
Labels: travel

There's a Samantha Brown video of the place if you want to post a clip of the actual facility.

Naw, I'll let this post have a sense of mystery.