"A Grilled Charlie has peanut butter LAST! Peanut butter outside, chocolate inside. Butter inside, cheese outside!"

Sure, a Grilled Charlie - the mythic butter/cheese/peanut butter/chocolate sandwich from "It's Always Sunny in Philadelphia" - sounds rather disgusting. But I'm a fan of the show, so I figured that I had to try making one at least once.

Now, there is a dispute as to how exactly it is made. Grill it up all at once with double cheese? Prepare each slice of bread separately, with peanut butter on one side and cheese on the other?

The latter version sounded like the lesser messier of the two, so that's how I went about it. 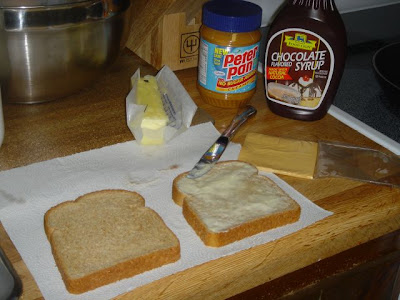 The prep. All ingredients can be easily found at your local grocery store. 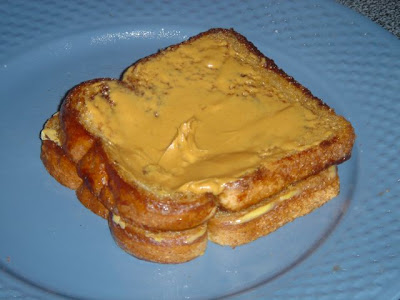 The peanut butter side. In a futile effort to be health conscious, the peanut butter that I selected is "no sugar added," so it's a heart smart sandwich! Also, I went against my normal preference and used creamy, as crunchy would've brought a strange texture. 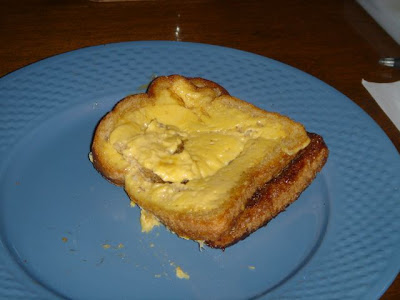 The cheese side. American cheese is edible - sometimes preferable even - in only a handful of foods: grilled cheese, hamburgers, hot dogs. Add this sandwich to the list, as it is the very definition of "culinary slumming."

Honestly, as disgusting as all the disparate ingredients combined might sound, the Grilled Charlie really wasn't all that bad. Oddly enough, the cheese kinda sorta complimented the already tasty pairing of chocolate and peanut butter. And the butter was rather benign, since it was melted and grilled. I don't know if I'll ever make it again, as constructing it was awfully messy. Also, I'd like to make it to 34.
Posted by Micah at 10:13 AM

re: sugar-free peanut butter, are you one of those that orders a triple quarter pounder, xlarge fries and a diet coke.

I am EXACTLY that guy. Every little bit helps!