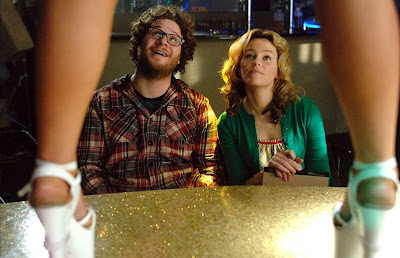 Ah, the fall movie slate. Forgotten are summer's brainless action movies and a new crop of respectable, finely-crafted, Oscar-worthy dramas are ushered in. Too bad I don't feel compelled to see any of the ones that I've read up on. But there are some bright spots that will get me to the multiplex. In order of release:

Forever Strong (September 26): Has there ever been a rugby movie before? Maybe Sean "Rudy" Astin can do for the sport what he did for football. And hobbits.

How To Lose Friends & Alienate People (October 3): I know nothing more about this movie other than the fact that Simon Pegg is the lead. And that's enough for me.

RocknRolla (October 8): If this latest Guy Ritchie gangster flick is half as good as Snatch or Lock, Stock & Two Smoking Barrels, then...it'll be pretty good.

Max Payne (October 17): Video game movies have a tendency to suck. Hard. I'm not sure why I'm somewhat optimistic about this one. Maybe it's because the source material played out like a film in the first place.

Quantum of Solace (November 7): I'll admit that I doubted that Daniel Craig could fill 007's shoes (and I still don't think he was the best choice), but Casino Royale was great. Sure, I miss the snappy one-liners of the previous Bond movies, but this new one doesn't appear to feature Denise Richards as a nuclear physicist, so I'll call it a wash. Oh, and for the record, I think that it has one crappy title.

Four Christmases (November 26): Okay, so Vince Vaughn's last holiday movie (Fred Claus) wasn't all that great. But I'm willing to give him another shot, since this one's geared toward grown ups.
Posted by Micah at 11:10 AM

oh my lord. "rudy" is in my top 3 worst movies of all time...up there with 'peewees big adventure' (yes i know you loved it) and 'havannah' (crossings cinema, circa 1990) . rudy: this was the movie that brought trite sports cliche to an entirely new level. i detested this movie and all its by-the-numbers, shameless pandering and manipulation. ugggh. my GOD that was a terrible movie.

we recently watched "august rush" which placed in the top 10 worst. jan would've loved it. robin williams as tough guy streetwise mentor to homeless child musicians? shit. hang on, i need to go twitter about this...

Granted, Rudy is no Lucas, but it ain't all that bad. (It ain't all great, either, though.)

Please do not besmirch Pee-Wee's Big Adventure. Now that is a classic for the ages.

I'd heard that August Rush was bad. You should've consulted me before you wasted a Netflix rental on it.

I saw Rudy once. It was too many times. But I maintain the title for Worst Movie Ever is a tie between Crash (not the Sandra Bullock, racism-is-bad cliche, which wasn't great either, but the effluvia whose tagline was "Sex and car crashes.") and The Forgotten. I wish I could forget it.

august rush was a piece of cra-crap-poop (boy, i'm just letting the four letter words fly out today, aren't i?) aimed at sucker music-geeks like my wife.

the pic at the top makes me think another seth-clunker is coming down the pipe. is that a preview for the green hornet?

dave - I haven't seen that Crash, but I do have the score on CD. I got for free back in my college radio days. I'm not sure if I've ever listened to it. Worst Movie Ever? Have you not seen Canadian Bacon? That'd be my immediate answer, but a truthful one would take some soul searching.

jasdye - ...starring Elizabeth Banks as Kato. I've actually really enjoyed all of his TV work and movies (though I haven't seen Pineapple Express), though I could see how his schtick could - and inevitably will - become tiresome.

As for August Rush, this music geek managed to dodge that bullet.

Come on, worst movie ever is Cabin Boy.

If it's so bad, why do I own the DVD? Hmmmm? Advantage: Micah.

i never called you a sucker music geek.

and by music geek, i meant band geek.