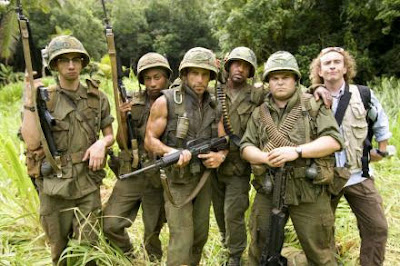 Tropic Thunder: Having seen the hilarious trailer, I assumed that this was going to be the funniest movie ever made. Unfortunately, it's not, but it still is pretty good. Ben Stiller does his patented Ben Stiller Doofus Shtick, if you can tolerate it (and I love the guy, so that's not a problem). Aside from a few lines - one of which may be the funniest in the film - Jack Black is wasted. Robert Downey, Jr., though, steals the show as a Russell Crowe-esque method acting; I swear, between his pitch perfect Tony Stark earlier this summer and this role, he must've made some kind of pact with Satan. Then there's Tom Cruise. Yeah, him swearing and dancing in a fat suit is funny...for a minute or two. But the gag wears thin rather quickly. His performance is not really worth the raves it is getting. The best part of the movie is actually the series of fake trailers at the beginning, which include spot-on parodies of stoopid action movies, fart-centric comedies, and shameless arthouse Oscar-bait. In the end, Tropic Thunder is a fun stab at Hollywood, but a bit of a disappointment.
Posted by Micah at 9:13 PM