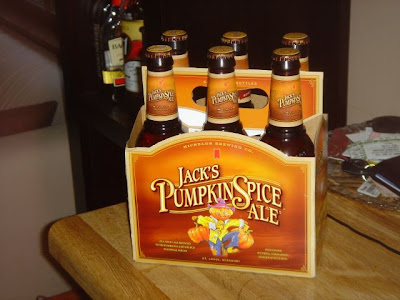 Yesterday I was singing the hosannas of pumpkin spice coffee, but what if I need my fix after noon, my self-imposed cut-off time for caffeine? Or if I want to get a buzz while enjoying the autumnal taste of Vitamin P? Two words: pumpkin beer.

So far I've had two pumpkin beers this season. The first one was new to me - New Holland Brewing Company's Ichabod - which spydrz bought a couple of weeks ago. Not bad. Not bad at all. This beer - made with pumpkin, cinnamon, and nutmeg - would be equally great capping off a long day of raking leaves or while you veg out on the couch while watching your alma mater return a kick-off for a touchdown (provided that your alma mater's football games are televised).

Just last week I bought a six pack of Jack's Pumpkin Spice Ale. Last year I breezed through many bottles of this and, since it's brewed by Anheuser-Busch, it's relatively easy to find.

Really? Awesome. I haven't been there since early in the summer (or maybe even late in the spring), so obviously they weren't offering any autumn brews.

you drink beer at noon?

On a good day. Seriously, sometimes on Saturdays, while watching college football or my backlog of taped episodes of "The View." What did Whoopi just say? Oh, no she didn't...

First comment. Flavored beers - much like flavored coffee - are an abomination in the eyes of God and Nature.

Second comment. Let me know if you head to the Ale House as I love all other kinds of beer.

if God didn't want us to have flavored coffee he wouldn't have had st. patrick invent baileys flavored creamer.

btw, micah, do the mcdonald's around you sell shamrock shakes during march? i heard that from a friend around your region there. otherwise, how do people know it's the holy season?

my take on jacks: too much spice, not enough pumpkin. still dig it though, not complaining. better than PBR.

did you ever taste my pumpkin homebrew from 2 autumns ago? way TOO MUCH pumpkin. but better than PBR.

wh1skeylover - No, Jennifer Connelly's breast reduction is an affront to God. Flavored beers and coffee are tools sent by Him to help enhance the beauty that He created.

jasdye - Jeez, I rarely go to MacDonald's (on the rare occasion that I get fast food, my top choices are Wendy's and Chick-Fil-A). But I think they do offer Shamrock shakes. Unfortunately, we don't have a river that magically turns green to alert us when to celebrate.

countparkula - Naw, I never tasted your brew. And when did PBR become the baseline for beer comparison? I could understand if you wore skinny jeans on a regular basis or listened to bands that don't even exist yet, but you don't.

Wh1skeylover - Oh, yeah. Not sure when I'll get to the Ale House next, but I'll keep you posted.

I must agree with your love of all things pumpkin. Since I'm down here in the second ring of hell...er, Florida this fall - I'm making pumpkin ice cream with maple-walnut pralines. Cold and refreshing, yet fall-like and pumpkin-y.
Enjoy the beer and the coffee!

That sounds awesome! Ship some up here when you make it.

I can't wait to bust out the pumpkin squares in a couple of weeks.