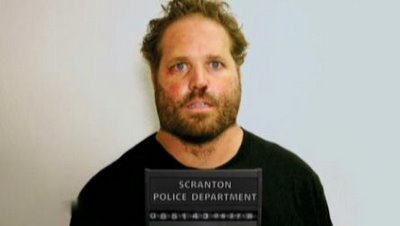 Tonight's episode of "The Office": "The Coup"

"I am going to kill you for real."

The Stamford branch is on crack. Nonetheless, I think I sensed a vibe (possibly unilateral) between Jim and that bird that sits behind him.

He needs to hit that.

p.s. - I don't care about Pam or think that she and Jim were "meant to be." She had her chance and blew it. Besides, she's got Kreid and Toby now.

spydrz - She's certainly more attractive this season (not that she wasn't all that in the last two).

SBN1 - That bird is Quincy Jones's daughter. And she's a looker. I think last night they planted a seed for her to be a rival for Jim's affections.

I dunno. I'm torn about the whole Pam-Jim thing. Yeah, she had her chance...but they're in love, dammit.

Yup! And I don't feel bad about it one iota. I see it as the equivalent of the many smoke breaks my co-workers take. Hopefully, the top brass will see it that way, as well.

MySpace is blocked here, though. :(

new episode isn't on iTunes yet.

i still think they should have extended his beard to mel gibson size. that would've been an extra shot of funny.

hug it out b***hes has got my vote for funniest line heard all year.

at least on a sitcom.

Yeah, it doesn't work so well with the ladies. He's tried.

michael tried too? i should have asked him before i tried.