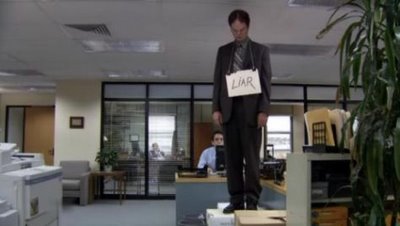 Michael forces his staff to attend grief counseling after the death of his former regional manager.

The bird thing went on a bit long.

"Society teaches us that having feelings and crying is bad and wrong. Well, that's baloney. Because grief isn't wrong. There's such a thing as good grief. Just ask Charlie Brown."

This episode made me sad. It reminded me of when my favorite aunt died... she had kind of a messed-up life, she did the whole hippy thing for a while and ended up getting AIDS somewhere in the middle of it. She ended up getting pregnant by an old friend from grade school, but he didn't know and she never told him -- she always felt bad because he loved her, but he was a little dumb. Then one day he visited her and found out that her little five-year-old was his boy. They got married and he cared for her until she died, and then he raised their son after she was gone.

Oh geez... I can't talk about it anymore!

Ryan's description of his uncle's death in Africa had me dying.

But the funniest bit of the night was on "My Name Is Earl" when they did the montage of Randy singing "Time After Time" with his little boombox.

my name is earl needs to be iPoded too.

"well, onetime me and my friend were at my uncle's. his name is bernie. but something happened and he died. but we had to pretend he was still alive..."

"wait, that's weekend at bernie's. come on guys, this is serious."

"do i regret enveloping my twin? no, because, i believe i'm stronger for it. inside of me i've got the strength of a grown man, and a baby."

but i don't think halpert's love-interest is anywhere as interesting as his with pam. think that's intentional.

THSE - Yeah, that was funny. I've heard that the "Earl" season 1 DVDs have some music missing (how could they not get that worked out in this DVD age?!). They had better have talked to Cyndi Lauper's peeps.

The seeds have just been planted for Jim and Karen. Maybe not as interesting now, but she is Business Chick Hawt.

yeah, but again, i think the idea is, pam is supposed to be plain jane. quincynetta is the attractive one. jim and pam is magnetic. that's the course this is taking. it's gotta be.

you heard it here first folks,
jim and pam are getting back together.

Oh, there's no doubt Jim and Pam will get together. The producers will turn this into a Sam and Diane thing.

It'll be interesting to throw a "you had your chance" angle at Pam, though.

I can still drool over Q's little girl.