This year's Micahpalooza was one to remember. Sure, Atlantic City is the poor man's Vegas, but it's still a fun town and the talent is pretty implantastic.

But before we could get there, we stayed overnight in Philadelphia. There we got sucked into a marathon of "Coming Out Stories" episodes on Logo. I'm still not sure why we were watching it, but each episode that we saw was disappointing. First, they all dealt with lesbians (and not of the lipstick variety). Even more of a let down, though, was that all of the people that were on the receiving end of the outing was cool with it. Where were the fireworks? The feelings of betrayal and anger? Yeah, it was cool for the folks on the show, but it made for bad TV.

(Click on all of the following photos to enlarge them) 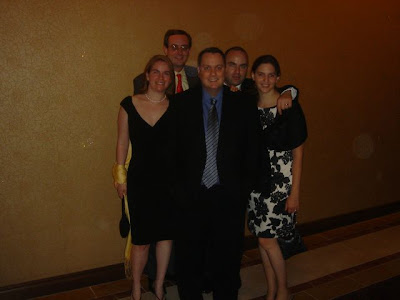 On Saturday Spydrz, Shamrock, MandaPanda69, and I had dinner at Mia, where I had some excellent shellfish risotto with a side of some kick-ass lobster mashed potatoes. We even met chef Chris Scarduzio. Good stuff.

The Tony Bennett show was awesome. The concert was sponsored by AARP, so the crowd was mostly made up of blue hairs. Backed by a small combo, Tony was in good form, blasting through shortened versions (pretty much just verse-chorus) of a bunch of songs. But hey, the guy's 81 years old. He's entitled to rush through his act. He punctuated every other song with a shout out to that song's composer. And every now and then he'd add a "Boom!" He even dedicated "The Good Life" to Paris Hilton. I know it sounds morbid, but I'm glad that I got to see him perform before he left this mortal coil.

Yes, the paparazzi got some snaps of us. We had some post-show drinks at Bobby Flay's restaurant at the Borgata. When I ordered a Rob Roy the bartender asked me if I wanted it "up or down." Not knowing what those options meant, but not wanting to sound like an idiot, I confidently replied "up." Well, that means the drink is served in a martini glass, not a highball or Collins one. So, from then on I was likely perceived as "unthreatening" to the Asian hottie bartender and the rest of the women present. 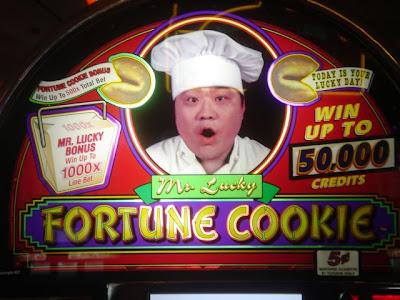 We did our gaming at the Borgata. Unlike my past trips to Vegas, I was not flush with student loan money. That coupled with my meager pay meant that I couldn't afford to wager much. I lost $45 on the nickel slots (in the same amount of time that MandaPanda69 lost $20) until I found him: Mr. Lucky. This friendly fellow was always good to me in Sin City. I consulted via cellular telephone my buddy Fraley, who was able to get $1000 from this Chinaman during one of our Vegas trips. After getting his super secret nickel slot system, I won $10. I then decided that I should cut my losses and accepted my $35 net loss. Spydrz, MandaPanda69, and I left Shamrock at the blackjack table, where he stayed until the wee hours of the morning. 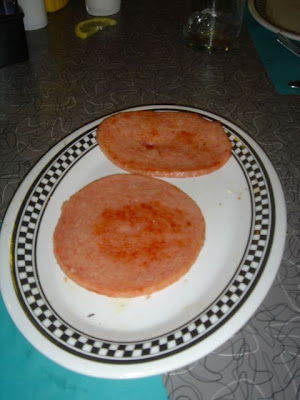 Breakfast the next morning was spent at the AC Diner. I was excited to pop my pork roll cherry. This regional breakfast meat product is always being trumpeted on one of my favorite podcasts (the New Jersey-based Hometown Tales), so I was eager to finally try it. Well, it tastes like Spam. Fried, somewhat spicy Spam. It was okay, but I don't think I feel the need to get it again. But I might.

And I was crowned Miss America! I felt so beautiful! 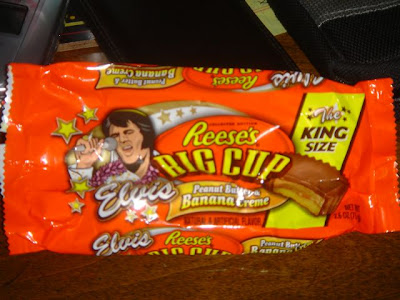 As with the trip up, there was hella traffic on the way home. But it wasn't so bad because it gave me time to muster the courage to try the Reese's Peanut Butter & Banana Creme cup with Elvis's likeness on the wrapper. It wasn't bad. It wasn't great, either. But it wasn't bad. Coincidentally, Al Dvorin, the man who coined the phrase "Elvis has left the building," died in a car crash on my birthday in 2004. Thank you, Today in Music History podcast!

So, that was the weekend in a nutshell. I'd like to thank my friends for my making my birthday a special one. I can't wait to see what you guys pull out of your hat for next year. As long as it involves booze and scantily-clad broads, I'll be happy. 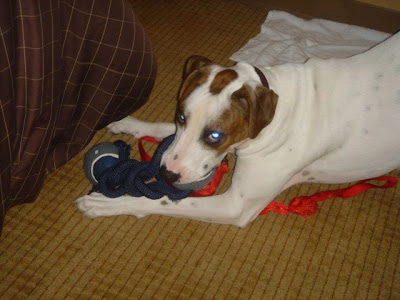 I'll end this Micahpalooza wrap-up with a picture of Monty and his blue balls.
Posted by Micah at 8:50 PM

speaking as president of the Friends of Micah-Chicago Region, i just want to congratulate you on a fun, but not too fun, weekend.

Rock over Atlantic City! Glad you guys had a good time.

I can't believe I missed it! While I was at home, I watched not "Coming Out Stories", but rather, a daily episode of "Miami Vice" (number 1 new show!) on the Sleuth Channel.

Thanks. Everyone is going to have to come out next year for Micahpalooza '08: Tuscany.

And there's a Sleuth Channel? Man, there's one for every interest.

how about Monty and those freaky blue eyes? don't they have something in photoshop (or at least picasa) that can fix that?

on a related note, has anyone seen the michael vick chew toy?

jasdye, do not be alarmed by Monty's tapetum lucidum...he reflects extra light on to his retina in the dark so that you don't have to.

jasdye - Monty's part pit bull, so Michael Vick jokes were abundant over the weekend, as you can imagine.