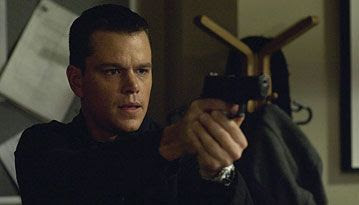 The Bourne Ultimatum: A good end to the series of movies. It would've been a great end if director Paul Greengrass would just KEEP THE FREAKIN' CAMERA STILL. I actually felt a little sick watching this movie.

Spider-Man 3: Not as bad as everyone said it was, but not as great as the second movie, either. Sam Raimi tried to cram too many ideas into this one, methinks.

Ocean's Thirteen: I had a blast watching this film. From the interviews that I've read, Soderbergh, Clooney, Pitt, et al. were trying to atone for their sub-par second effort. They succeeded.

Fantastic Four: Rise of the Silver Surfer: This was a very enjoyable popcorn flick. I don't like the trend that every superhero must be dark and brooding (the latest Superman movie, anyone?). I'm glad that they didn't go that route with the FF.

1408: This Steven King thriller was pretty good. I swear, John Cusack has taken the Dick Clark Time Defying Serum. The man doesn't age. Anyway, this was pretty creepy without resorting to gore or torture. Refreshing! Added bonus: there's a line of dialogue that had to have been added once Samuel L. Jackson was cast.

Live Free or Die Hard: This movie had every right to suck, since a) it is the fourth in the series and b) the title is incredibly stupid. But it turns out that it is freakin' awesome! Wall to wall action. This is probably the surprise of the summer.

Ratatouille: I loved this film. The animation was amazing. Sure, seeing tons of rats in a kitchen is kind of disconcerting, but it was funny. Pixar really rebounded from Cars (my least favorite movie put out by them).

The Simpsons Movie: I am a Simpsons nut. That said, this was funny, but not the end-all be-all of Springfieldian humor. But seeing as how the TV episodes aren't all that great anymore, this could have been a lot worse.
Posted by Micah at 9:12 PM

was the line:
"will somebody get these Mother****ing snakes out of the hotel?"
was john cusack still holding up a boombox playing peter gabriel songs?

ratatouille: my favorite movie of the year, bar none.

can't wait to see bourne ultimatum or simpsons (though i know i should keep my hopes low for that one).

Yeah, saw Bourne last night and I agree. What happened to stunts you can SEE? I remember when the stunts were what sold the damn movie. I haven't seen such shaky camerawork since the Zapruder film. Too soon?

jasdye - Close. The actual line is "It's an evil fucking room." Several people (including myself) chuckled when he said it. And no PG, but the Carpenters' "We've Only Just Begun" humorously plays from the room's clock radio several times. Spoiler alert!

The Rat: Great flick. I couldn't believe how real the animation looked at times.

And c'mon. FF wasn't totally lame. Sure, the Thing's character lends himself to brooding, but its nice to see superheroes enjoy being superheroes. The Silver Surfer animation looked surprisingly good. But Jessica Alba did look a bit off. I never thought that would happen.

Go into the Simpsons expecting a superior late season episode and you'll be fine. And there's gags popping up through the credits, so be sure to stay until the very end.

How does a new dad get away to the movies, anyhow?

srah - Actually, the series is quite good. Definitely worth watching. Just be sure to take some Dramamine before watching parts 2 and 3. (I didn't find SPR to be as bad, camera-wise.) I'm going to buy The Bourne Identity book today. From what I've heard, the movie and the book are entirely different, aside from character names, so it'll be like getting another Bourne story!

wooly - Zing! Yeah, it was a waste of perfectly good fight choreography. I'm sure they spent a lot of time perfecting the scene, only to have the camerawork make all the moves indistinguishable. Batman Begins is another recent offender.

I can kind of see how the shaky cam is meant to put the viewer "in the action" (don't agree, but can understand it). But in the latest Bourne movie, the camera is all over the place when during simple dialogue scenes and close-ups of text on a page. That's just ridiculous. I don't know about you, but when I'm talking or reading, I don't swing my head wildly to and fro.

well, the people in Rat looked like cartoons. i wouldn't be too impressed if they did look real, maybe scared (remember the Final Fantasy movie? that was freakishly real). i actually liked the fact that it was about great art and creativity. and did it in a truly great and creative way.

yeah, ben Grimm after all. but i felt like the whole series has been a bunch of hackneyed actors (with the exception of The Commish in The Things part and somewhat to whatshisface playing The Torch) trying to play the part of characters they don't know or understand and doing a crummy and lifeless job of it.

maybe i should go into the Simpsons movie expecting it to suck... and be pleasantly surprised.

since the baby, i've only gone in to see Underdog with the wifey on our anniversary (she's more into cutesy movies).

Can't say I remember much about the second Bourne but I actually liked the trailer for the third so think I'll go see it anyway. But tnx to your tip I'm now prepared for nausea...Maybe I'll skip the popcorn just this once =P

jasdye - Yes, the people and rats looked cartoony, but everything else was photo-realistic (the backgrounds, sets, etc.). Now, that upcoming Beowulf movie looks creepy.

And I agree that Vic Mackey and the Human Torch are the best things about the FF movies. I never cared for the dude in the Reed Richards role. Not a fan of the Dr. Doom guy (and the messing up of his origin - nerd alert!). And while I wouldn't have cast Jessica Alba, she sure is purty. Maybe next time they should do a Fantastic Two movie.

You saw Underdog? Ha ha! Have you seen Bratz yet?

stiletto - It's not for the squeamish. But it is kind of cool in that - I don't think I'm spoiling anything here - that the 3rd movie actually begins before the 2nd one ended (right after the Russian car chase, to be exact). I thought that was neat.