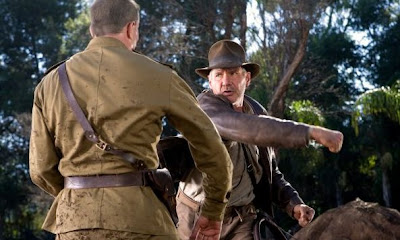 Indiana Jones and the Kingdom of the Crystal Skull: I miss Communists. When I was growing up, they were the go-to Bad Guys in practically every movie. There was nothing quite like some godless Reds talking smack about this fine country to get your blood pumping. Now they've been replaced with Neo-Nazis and EEEEVIL corporations. *Yawn* So this movie was doubly nostalgic: a new Indiana Jones movie AND Cate Blanchett and company chewing up the scenery as a bunch of ruthless Ruskies. And I had a blast. I'm glad to say that this didn't bring a Phantom Menace level let-down. A 60+ year-old Indy globe trotting in the Atomic Age provided a lot of laughs and action. Upon little reflection, my rankings: 1) Raiders (perfection) 2) Last Crusade (it's got Sean Freakin' Connery) 3. Crystal Skull (a close third) 4. Temple of Doom (two words: Kate Capshaw)

The Chronicles of Narnia: Prince Caspian: Enjoyable, if a bit overlong. I'd put it on par with the first movie. I've only read C.S. Lewis's non-fiction stuff, so I'm not sure how far the movie strayed from the source material. With this movie, Peter Dinklage (Elf, Death at a Funeral) has moved past Tom Cruise as the best little person currently working in Hollywood.

No Country for Old Men: I liked this film, but I didn't swoon like all the critics did. Yeah, Javier Bardem was great (as was the rest of the cast), but there wasn't much to the plot. At the risk of having my Movie Geek Card revoked, I'm going to say that I enjoyed The Ladykillers more.

I Am Legend: Will Smith did an admirable job portraying the mental state of the last (healthy) man on Earth and the isolated NYC set was pretty eerie. Unfortunately, the movie was undone by the terribly unrealistic looking infected people. This ranks near the top of big budget/unforgivably awful CGI movies.
Posted by Micah at 9:39 AM