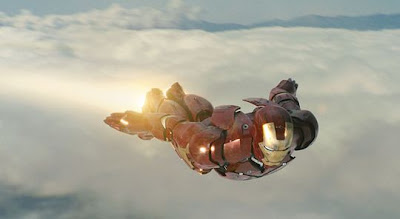 Iron Man: Awesome, awesome, awesome. Robert Downey, Jr. owns this movie. The most outlandish part of this comic book movie? There's a scene in the beginning where playboy/arms manufacturer Tony Stark is given an award and in his introduction there's a shot of him on the cover of "Rolling Stone" with the words "Protecting the World." As if that rag would give this type of person a positive cover story. Marvel comics fanboys: make sure you stick around until the end of the credits.

21: Or Ocean's Eleven: The New Class. This was a fun movie with a kick-butt soundtrack. Just forgive the implausibilities and plot holes and have a good time.

Expelled: No Intelligence Allowed: At times it strays from its main point (institutes of higher learning firing people if they stray off of the academic plantation), but it was okay. People's minds will already be made up when going in, though.

Vantage Point: A nice diversion with a cool gimmick, but nothing more.

Semi-Pro: Well, I'm glad it was rated R because the few laughs that are present are derived from the profanity. Other than that, it wasn't all that great.

There Will Be Blood: Daniel Day Lewis completely deserved his Oscar. A wonderful film.

Beowulf: It's a cliche to say that nowadays watching most action movies is like watching a video game, but here that point is valid. Frank from "30 Rock" is right in that the more realistic the animation, the creepier it looks. Silliest part: Grendel's mom had high-heeled feet.

The Kite Runner: Usually, I'm not a fan of movies about boy rape, but this was pretty good.

Death at a Funeral: This was funny, but it would've been even funnier if I hadn't seen the trailer beforehand (the funniest parts were in it).
Posted by Micah at 9:48 AM

I saw Iron Man Yesterday and left before the credits were done.

I do concur...I was suprised how good this movie was.

Friends give me crap, but I almost always stick around until the end, if only to check out the music credits (which are always last). In this case, I knew going in that there was a small scene afterwards.

I can spoil it for you, if you want.

Yeah, go ahead, but you may want to put a spoiler alert on the post for everyone else.

Tony Stark enters one of the rooms in his house to see an eyepatched Samuel L. Jackson standing there. He introduces himself as Nick Fury and says he wants to talk to him about the "Avengers Initiative".

For a fanboy such as myself, it was pretty damn cool. Marvel today announced their slate of upcoming Thor, Captain America, and Avengers movies, among others: linky

RDJ (as Tony Stark) is supposed to have a cameo in the new Hulk movie. They seem to be laying the foundation for the Avengers movie.

Wow. Someone else actually saw Death at a Funeral? I never saw a trailer for it, just picked it up at random, but I liked it. What's his name, the guy from Firefly/Serenity, he was effin funny.

Ant Man the Movie? yes that will be exciting.

re: 21. weren't they all supposed to be Asian/Asian-American?

re: Beowulf. Exactly. which is why i won't see it and why i - as an english teacher - will forever be peed off at zemeckis for making that dreck.

dave - No idea what that guy's name is, but he'll always be That-Dude-Who-Thought-He-Was-A-Pirate-In-Dodgeball.

jasdye - Actually, I'm intrigued with Ant-man, since it is in Edgar Wright's hands (Shaun of the Dead, Hot Fuzz).

From what I understand, the people behind 21 took many liberties with actual events. You mean MIT isn't populated with hot brainiacs?

I haven't read Beowulf since 11th grade, but I hear they strayed from the epic poem. Still, it was way better than this adaption. Stinkaroo!

yeah. when i teach, i like to use movie clips to support the text. i tried to steer my students from that crap when i student-taught Beowulf. (Aliens was a better fit, actually)

and the fact that only one student watched it, i felt that was a success.

I agree about Iron Man. It was excellent, though there was far too little Black Sabbath. I actually thought the segue for the sequel was a bit lame and kind of contrived, but what do I know?

jasdye - Do you show Raiders of the Lost Ark in class? 'Cause that'd be wicked cool.

dubin - Yeah, I know! Just one song and mostly instrumental (w/ Robert Downey Jr. on vocals). I was totally geeked out about the tag at the end, though. Hopefully, Marvel will be able to bring all of those characters (and their respective actors) together. That'd be quite a feat and I'm not terribly optimistic.

re: showing Indy in class. i guess i could show clips from the trilogy in respect to mythology (although, what the h**l is a Crystal Skull?). it should tie in with some literature or theme, though. (although before holidays i have been known to show a random movie or two.)

re: Avengers. Warner tried to do the Justice League route and just dropped it. i'm not holding my breath for any such endeaver (JL would've been something wicked. the Avs? notsomuch.)

I should know better than to use an obscure SNL reference. Still, the kids would love Indy.

I thought Warners was still going ahead with their JLA movie (while scrapping the Wonder Woman one), but using different actors than the ones in each of the characters' respective franchises. But I'm a Marvel fanboy and admittedly out of the DC loop.