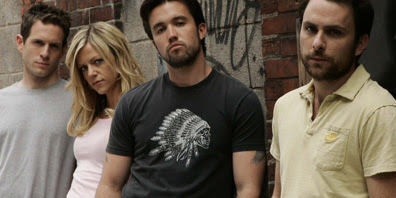 Tonight's first episode of "It's Always Sunny in Philadelphia": "Dennis and Dee's Mom Is Dead"

Barbara's sudden death has a profound impact on her surviving family. Frank and Dee are furious at being left out of the will and team up to seek revenge on the dead woman. For Dennis, the thrill of inheriting his mother's stately mansion is tempered by the realization that he, Mac, and Charlie are friendless and destined to die lonely and forgotten... unless they meet new friends. The only problem is that they don't quite know how to make friends.

The second episode: "The Gang Gets Held Hostage"

The McPoyle brothers and sister Margaret take the gang hostage at Paddy's, raising the stakes to a new level in the feud between the two groups. Frank, who is up in the bar's ventilation system tracking down his will, may be their one hope for survival.