Crush of the Week: Kristen Bell 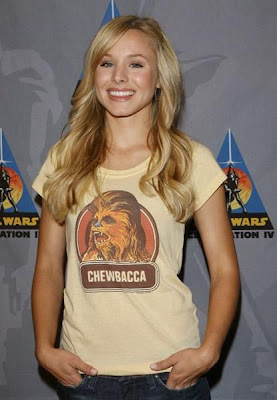 She'll be appearing on multiple episodes of "Heroes" this season, a show I ditched midway through last season because it conflicted with "24". That was a bad decision in hindsight, given how piss poor Jack Bauer's sixth season turned out to be. Anyway, I'm catching up on "Heroes" on DVD now.
Posted by Micah at 11:33 AM

You're *not* watching football??

I meant "now" in the figurative sense, as in "over the holiday weekend". Watched a few episodes last night and this morning.

The literal "now" is all about college football. Go Hokies, Bucks, and Spiders!

Spiders game is at 7pm. But I think that's Nashvega$ time, so that's not us.
ASU is tied with Michigan. Go App State!

I guess I should also throw in a "Go, Spartans!" for dubin and my cousin.

I'm seriously toying with getting the ESPN GamePlan.

I bark for no one!

If ASU can keep up and win, I'll be as happy as a little girl.

you rooted for app state? nuts!

did anyone honestly see that coming? fortunately, i'm only a couple points behind all you leaders.

there's poetic justice for y'all. Miss Teen USAmerica is headed to
Appalaichan State.

The best part about today is that for the rest of the college football season, we won't have to watch the talking heads on ESPN talking about Michigan's chances of winning the national championship!

It's like if MSU had lost to UAB...though they didn't...not even close.

jasdye - It's not so much as rooting for App State, as actively rooting against Michigan. Always have, always will.

I didn't know that Miss Teen SC was going to App State. That's so sweet, like such as. The Iraq. South Africa.

dubin - It was funny, though, to see literally EVERY sports commentator that I saw make excuses for Michigan's loss...they lost a lot of defensive players, it was their first game of the season, App State won the Div. 1-AA national championship the past two years, yada yada. Rationalize it all they want, it was still probably the most embarrassing loss in the program's history.

I wonder if Lloyd Carr posted his resume on Monster.com this morning.

The part I thought was shitty was that not even Lloyd Carr or any of the players interviewed had one nice thing to say about Appalachian State. What did you think was gonna happen when you scheduled the two-time reigning I-AA Champion? On the other hand, they did manage to scrape every cliche football excuse out of the bucket...so kudos for that.

Maybe Lloyd could get himself hired as an assistant to Jim Tressel.

But would he wear the sweater vest?

I think he'd be required to wear a dress.