Originally, I had planned on recognizing a litany of people who have achieved excellence in facial hair and life*, but then realized it all boiled down to the yin and the yang of bearded awesomeness: Ernest Hemingway and Jim Henson. 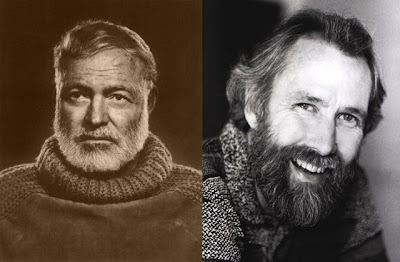 One was tough, rugged, manly to the Nth degree, and a literary master. The other was funny, sensitive, good-hearted, and a master of puppets. Both are two of my favorite people that have ever walked the Earth.

I doff my beard and raise a glass to you, good chaps. Although you were two very different people, both you and your beards made this world a better, more bad ass place.

wasn't Jim Henson the inspiration for that one metallica album?

Load? Yeah, that's Henson's blood and semen on the cover.

I devour a Hemingway book, short story WHATEVER anytime one comes my way. My literary essays in high school AND college were written about this man and his works. The beard? That is not why I love him but alas...

i say the same about henson...

Denae - In 11th grade (or "grade 11" to our Canadian friends), I was dragging my feet with my assignment to read A Farewell To Arms. The night before the test I read the whole thing in one sitting...and loved it. Now it's one of my favorite books. I think I have almost everything he's put out, but I haven't necessarily read everything that I own (yet).

leave it to you dorks to turn Beard Week into Book Week. you should be talking about how Hemingway's beard stopped a bullet during the Spanish Civil War or how when he was lost at sea he plucked individual beard hairs and fashioned a fishing line that he used to catch a marlin, upon which he feasted until he was rescued.

p.s. Nah, you must be thinking of another band. Everyone knows that there were no more Metallica albums after "...And Justice For All."

Reggie, I freakin' love your contributions to this humble blog. Ha ha.