"Like the back of a Volkswagen?": my Halloween costume that wasn't

I spent Halloween doling out candy at my sister's house, so both she and her husband could take their kids out trick or treating. Since I wasn't out making merry (read: getting drunk), I didn't bother dressing up. But what would I go as if I had gone out?

One of my cinematic heroes: Brodie from Mallrats. 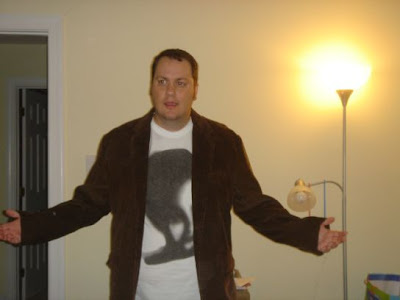 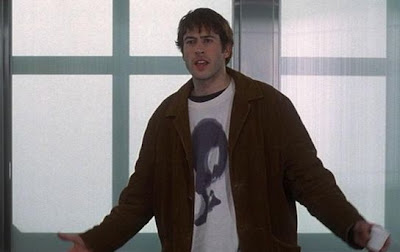 The similarities are striking, no? Granted, I didn't have a Dixie cup or bag of chocolate-covered pretzels*, but I would've acquired those items had I officially dressed up for the holiday. 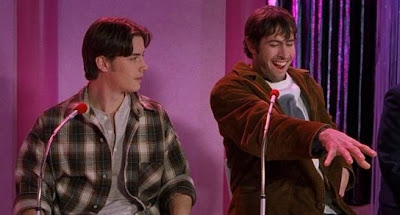 And just for the heck of it, here's another Mallrats picture. This one always makes me chuckle.

Mallrats is probably my favorite Kevin Smith movie (a view that pretty much only I hold) and has a special place in my heart. The day after a bad break-up with a college girlfriend, my school was showing this movie and I went...and laughed my butt off. Then I went back and watched it again the next night. And the night after that one. I know that it's weird to find such solace in a movie consisting solely of dick and fart jokes, but it got me through a really bad time.

So that's my Brodie Bruce outfit. I've had a different costume in mind for the past few Halloweens now, but have never actually assembled it. I'm still going to keep mum about what it is, but hopefully, next year it'll come to fruition.

*They'd be a little bit melty, but damn exquisite.
Posted by Micah at 10:15 AM

You're not alone, brother. Mallrats is my favorite too.

"She calls you callow in here."
"You say that like it's bad."
"It means frightened and weak-willed."
"Really? Shit, that was the only part of the letter that I thought was complimentary."

Fill this with Coke, no ice.

Micah, I too think that Mallrats is one of Kevin Smith's best works to date. I never understood the cult of worship that surrounds Chasing Amy. I thought it was unrealistic and stupid. It always bothered me how much people praised Chasing Amy, and bashed Mallrats in the same breath.

spydrz - Supposedly, that aspect of Brodie was based on a real person that Kevin Smith knows. He'd carry around a Dixie cup all day or something.

mehrdad - I like Chasing Amy, as well (mostly due to Jason Lee's performance), but I'm not surprised that it's better regarded. Mallrats is pretty much about dudes BSing at a mall all day. Chasing Amy is more "mature" and has the strong gay theme to it. Obviously, the art house tastemakers would favor the latter.

Have you seen the Mallrats DVD? There's a whole subplot about an assasination attempt on the governor mix-up that the studio cut out. They don't even get to the mall until 20 minutes into the film. Had they kept that story, the movie would've been a totally different beast (not sure if it'd be for the better, though).