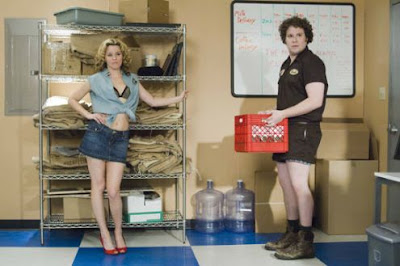 Zack and Miri Make a Porno: This is the first non-"Jersey Trilogy" Kevin Smith film that I've seen (though I would like to see Jersey Girl someday). Going in, my expectations were very high and, unfortunately, the movie didn't meet them. That's not to say that this isn't a very solid comedy, because it is. But you've got to judge a comedy on the big laughs that it provides and it just didn't deliver as many as I'm used to with a Smith movie. He's matured as a director and a writer, though. The dialogue is less like a series of monologues and much more natural (probably due to Seth Rogen's insistence that the director greatly easy up on his "no improv" rule). And "the scene" between Rogen and Elizabeth Banks is expertly shot and probably the most well-crafted one of Kevin Smith's entire oeuvre. It doesn't hurt that Banks' O-face is the sexiest thing that I've seen all year. That alone is worth the price of admission.
Posted by Micah at 12:11 PM

totally confused by your first sentence. you've only seen two k smith movies and both were set in jersey?

and, great nod to Office Space, still one of my faves.

Actually, that's just a fanboy term for his movies that feature characters who make up the View Askewniverse: Clerks, Mallrats, Chasing Amy, Dogman, Jay and Silent Bob Strike Back, and Clerks II. While Jersey Girl is set in New Jersey (I presume), it doesn't share any VA storylines or characters.

And, dude, I'm serious. I'm not spoiling much, but the close-up on Elizabeth Banks' face is hotter than any nekkid scene that I've seen in recent memory. And I'm on the internet. A lot.

That should read Dogma above. To my knowledge, Kevin Smith never directed a movie titled Dogman.

Yeah, I saw it this weekend and laughed my arse off. I didn't mind/care that it was set in a town far, far away from the Jersey universe. To be honest, I was kinda tired of all that sheeit. It was good to see the some of his fave actors play different roles.

You're right about the o-face. But they cover the reason for that in the movie - without giving anything away here, it's a different kind of scene than we're used to in stroke films.

Oh, I agree with you. It's nice to see Smith branch out. I honestly didn't really like J&SBSB all that much, but that may be because I don't think the titular characters are strong enough to carry an entire movie. And I'm not a stoner. Clerks II ended that series of films nicely, though.

The O-face scene was just really well-done, cutting back and forth between their moment and the crew observing it (great use of music, too).

Wait - when does girlfriend season end?!

while there's no official end, many agree that peak season runs from the last days in august up until late november. I'd say it's due mostly to a unique combination of seasonal change, holiday anticipation, and the overall dwindling supply of available poon in the winter months.

I'd better hurry up and get my permit then.