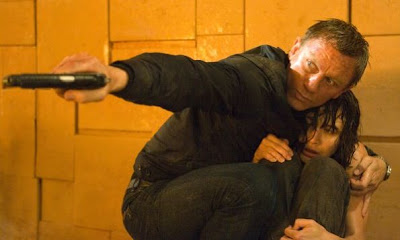 Quantum of Solace: Bourne. James Bourne. That pretty much sums up what this entry of the 007 series is all about. It's not a James Bond movie, but a flat out Jason Bourne copycat. "Dark" government agent gone rogue, motivated by revenge? Check. Confusing, extremely tight and overly shaky camerawork during the action scenes? Check. There were several good spots (the opera scene, an allusion to Goldfinger), but they were few and far between. Casino Royale was a good reboot for the character, and Solace would've been a great place to update and reintroduce some of the things that made this series fun to a new generation. But it didn't and director Marc Forster merely made a generic action movie. I miss the gadgets. I miss the cheesy one liners. I miss our hero bedding EVERY woman (whose names are silly double entendres, I should add) that he meets. I miss James Bond.

Note: At least, after being M.I.A. in Casino Royale, the nekkid babes are back in the opening credit sequence. And Jack White and Alicia Keys' song was okay. But don't get me started on this movie's dumb title*, lack of the "Bond, James Bond" line, and the placement of the opening iconic gun barrel shot at the very end.

*Yeah, I know there are only a handful of unused Ian Fleming titles and this is the best of that meager lot, but still...
Posted by Micah at 10:57 AM

I still need to see it. I am going in knowing that most of the reviews I've heard have been negative, but also knowing that it will take a complete trainwreck resulting in the deaths of everyone I love for me to hate it more than I hate "Live and Let Die" and "Diamonds are Forever."

It's worth seeing for completeness' sake, I guess, but it definitely wears its influences on its sleeve. I may be ragging on it a bit too hard, but I HATE HATE HATE this extreme close-up/shaky cam trend. There's one fight scene early on between Bond and a baddie and both are dressed in similar fashion. It's so tightly shot, you can't tell who is who. Gah!

Good to know. I am getting a little tired of the same ole' action flick. I might pass on this one.

Bond is dead.
No one cares.
If there is a hell, I'll see you there.

Denae - It's definitely not worth more than a rental.