My second date with Sarah Palin

Well, it's been a little over a fortnight since my first date with Gov. Sarah Palin. And while at least I had a good time then - I can't vouch for her - I hadn't heard from her since. Did I tick her off somehow? Did she see the Slate and NPR podcasts on my iPod? Was it the unsavory Blue State company that I keep? The fact that I hate Power Country?

It turns out that I was over thinking her silence, as I'm unfortunately wont to do. She e-mailed me again last week to set up a second date for Saturday! 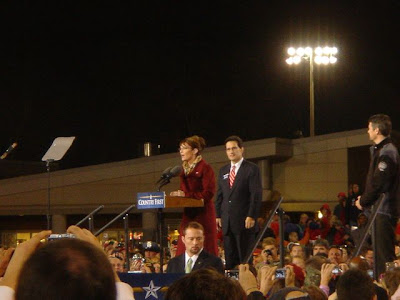 This next date was a nighttime one, which was a good sign. I didn't quite "get" why she wanted to meet at a high school, though. I'm fifteen years removed from my school, she much more from hers. But, hey, I went along with it, though I also questioned why she wanted the date to be outside. Those are great for springtime walks through the park; not so much for standing still while the temperature drops. I just chalked it up to that being how they do things in Alaska. In a budding relationship that has so much potential such as this one, it's best not to second guess yourself, lest you screw things up.

So, there was a lot of waiting around for her. I knew she had to run some errands in a couple of other states that day, but I showed up early anyway. Just as I was ready to leave, she showed up, looking as beautiful as ever.

Like last time, she did most, nay all of the talking. Some of the conversation (if you could call it that) was just her repeating stories from our last date. And lots of talking about her old man again (I'm starting to think that she's got daddy issues). But she did have some new stuff to talk about. Something about clean coal and a looming dangerous monopoly of the federal government, I think. Again, I was too busy swooning, like when Elaine dated "The Wiz" on that episode of "Seinfeld."

Our date was all too brief, though. Since it was getting late, she had to get going. I was hoping that she'd invite me in for "moose burgers" (or "coffee," as we call it in the Lower 48), but no dice. On the bright side, I guess that's a good indication that she's not a slut.

Unfortunately, this may have been our last meeting for a while. See, if she doesn't get that big promotion tomorrow, she said that she was just going to go back to her folks' place up north and get her life in order. But she left open the possibility of another date in, say, four years. I wished her well, we tearfully said our goodbyes, and that was it.

I don't know, man. If she doesn't get that promotion, it's going to be a long wait. In the meantime I'll have to hit eHarmony or CPAC. 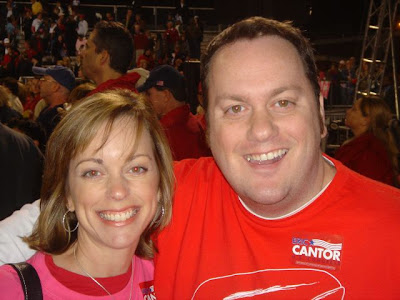 It's a shame, too, since my sister hasn't liked any of my previous girlfriends, much less cheered and waved signs when she hung out with them. There's just something special about Sarah.
Posted by Micah at 2:01 PM

Email ThisBlogThis!Share to TwitterShare to FacebookShare to Pinterest
Labels: politics

Wait a minute. Hold the phone. She wasn't there for me?

I'm sure 7,998 other people share your notion, but no. Sarah and I shared a personal moment. Were you even there?

Was it the unsavory Blue State company that I keep?

heh. i suppose you're right. in the joe the mccarthian politics, you'd be deemed anti-American by association.

Ha ha. I had you (and a couple other folks) in mind when I wrote that line. :)

Talk about a "cult of personality".