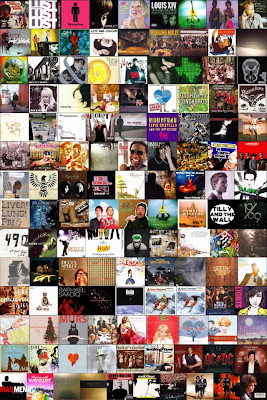 1. Vampire Weekend - Vampire Weekend Ever wonder what Paul Simon's Graceland would've sounded like if it was produced by Wes Anderson? Here you go. Really, there's not one clunker on this album, a winning mix of orchestral indie sensibilities and afro pop.
2. Frightened Rabbit - The Midnight Organ Fight Just a stunning album from start to finish. Highly recommended for fans of heartfelt music, casual cursing, and thick Scottish brogues.
3. Steve Poltz - Traveling/Unraveling This is sort of a cheat, since I'm counting both of his '08 albums as one. Each of the singer-songwriter's albums are great. Whittle them down to their best songs and you have a remarkable album.
4. She & Him - Volume One Albums by actresses-turned-singers usually end up to be huge messes, but Zooey Deschanel - with help from indie hero M. Ward - bucks the trend by keeping things simple and organic.
5. Mates of State - Re-Arrange Us This married duo gave their sound a little more intimacy by switching from organs to pianos, but luckily they still kept the wonderful, hooky melodies.
6. Neon Neon - Stainless Style This concept album about auto magnate John DeLorean (think Back to the Future) sounds uncannily like it was made in the 80s. Love it.
7. Los Campesinos! - Hold On Now, Youngster/We Are Beautiful, We Are Doomed Another two album cheat, but I find this Welsh band's combination of indie pop, singalong choruses, and glockenspiel (!) to be utterly irresistible.
8. Hayes Carll - Trouble in Mind Though "She Left Me For Jesus" got all of the attention, the rest of his album holds up just as well, including his twangy cover of one of my favorite songs (Tom Waits' "I Don't Wanna Grow Up"). I wish more country music sounded like this.
9. Lenka - Lenka Unabashed pop fun. That is all.
10. My Morning Jacket - Evil Urges After years of writing them off simply because of their name (I thought they were a whiny emo band), this is my introduction to their music. Other reviews have stated that this album doesn't "sound" like MMJ. So, I guess my favorite MMJ album - which includes "Librarian," a lovely song about my fetish of choice - isn't a MMJ album, after all.

In a first for the Micah World Best Of, I'll post the rest of my rankings in the comment section, so as not to clutter up this post. Keep in mind that I excluded from consideration EPs, Christmas music, compilations, stand-up/spoken word discs, and albums that I feel that I didn't listen to enough to give an informed spot on the list.

Best backstory:
Bon Iver - For Emma, Forever Ago Boy dissolves band, breaks up with girl, and gets sick. Boy retreats to Wisconsin cabin for three months. Boy emerges with a very pretty album.

So retro they're nowtro:
Raphael Saadiq - The Way I See It
Al Green - Lay It Down
Tom Jones - 24 Hours
Sharleen Spiteri - Melody

hell, i don't think most pro-critics would put out such a comprehensive list. i think all of paste mag came out with a top 60 altogether.

One of the only upsides to my job is that it allows me to be on autopilot, thus giving me lots of music-listening time.

SBN1 - I clearly laid out the ground rules in the CotY nominating post. Once that's off of the front page, the Secretary of State will certify the winner and then I'll announce the Crush.

Voting is expected to be over tomorrow (I'd think, but you never know with Blogger), so everyone exercise your rights if you haven't already.

Ah, my year is now complete! Thanks Micah. :)

Ha ha. I had a feeling you'd surface for this post. Hope I turned you onto a new album or two.

And no one's going to give me any love for that Cure line? That actually made me laugh when I wrote it. But I'm a sucker for terrible puns.