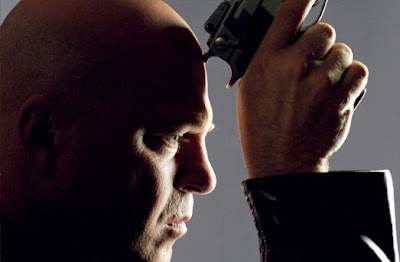 The flickering images on the idiot box that captured my attention in 2008:

1. "The Shield": It was sad to see this show end, but oh what an ending it was - intense, shocking, and heartbreaking. Vic Mackey got exactly what he deserved in the end. And we got some closure. That's how a series finale should be done. Do you hear me, "Sopranos"?
2. "Mad Men": 2008 was the year that I discovered "Mad Men" and I'm a better person for it. Come for the high quality drama. Stay for alpha female Christina Hendricks.
3. "Dexter": Without a doubt, this is the best show about a Miami serial killer working for the cops on TV. This season's twist - having Dexter get a best friend/protege (Jimmy Smits) - paid off well.
4. "Breaking Bad": The best show you didn't see. Bryan Cranston, playing a terminally ill high school chemistry teacher who turns to cooking crystal meth, really deserved his Emmy.
5. "It's Always Sunny in Philadelphia": Maybe it wasn't the strongest season for the gang, but it did introduce the catchphrase "Wildcard, bitches!" into my lexicon. And for that I am forever grateful.
6. "The Soup": Thank goodness for this show. Joel McHale and his crew snarkily wade through hours of TV's wasteland, so I don't have to. God bless you, spaghetti cat.
7. "24: Redemption": After a very long hiatus, Jack Bauer finally returned to kick some bad guy butt. Added bonus: the portrayal of the UN and Washington bureaucrats as cowardly, self-serving, and ineffectual.
8. "South Park": AIDS, Britney, Lucas and Spielberg raping Indiana Jones, giant guinea pigs, Obamatons, vampires, internet shortages...even the usual dud episodes were pretty funny.
9. "John Adams": History is fun! Paul Giamatti...wow.
10. "Entourage": Pure escapism and I love it. Ari and Lloyd are still the best couple on TV.
11. "A Colbert Christmas: The Greatest Gift of All!": This throwback to old school Christmas specials is nostalgic comedy gold and plays better on DVD, where you can ditch the canned laughter. Who knew Colbert was such a capable song and dance man?
12. "The Sarah Silverman Program": Crude, absurd, and funny. The adventures of Brian and Steve continue to be the best parts of the show. Not that the rest of it is totally ozay.
13. "Californication": I watched it all for the nookie.
14. "Secret Diary of a Call Girl": I watched it all for the English nookie.

Special thanks: the writers strike Because of this forced break, I was able to free up more time to go to the gym, read, and do other non-TV related activities. And then that all came to a crashing halt around Olympics time and I resumed my couch potato ways.

Note: I don't include most network shows on my list, since they usually straddle the line between two calendar years. How can you proclaim that a show is the best of the year, when only half of it airs then? So that explains the absence of favorites such as "30 Rock," "The Office," and "Life on Mars" (US) above. I've noticed this year that some critics are remedying that problem by making "Best Episodes" lists, but that would require too much thought, research, and time on my part. I'm lazy.
Posted by Micah at 11:26 AM

Email ThisBlogThis!Share to TwitterShare to FacebookShare to Pinterest
Labels: Best of, TV

Remember, LoM (UK) is significantly better than what we get.

Thanks to my new region-free DVD player, I shall find that out shortly.