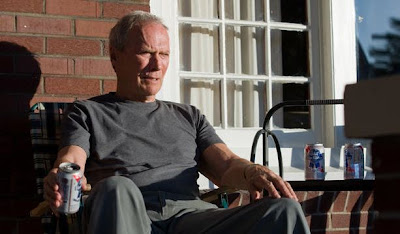 Gran Torino: Excellent. A growling Clint Eastwood portrays a racist old coot who shakes the Crime Stick and takes back the streets, while growing in the process. Sure, there's some subpar acting by the supporting players (forgivable since they're largely newcomers), but Clint carries the film on his manly, gruff shoulders. There's lots of talk about this movie dealing with race relations and, while it does, I think it's just as much about generational divide and a longing for a time when people respected each other. Fun tip: before watching this, make up some racial slur bingo cards.

Ghost Town: Call me crazy, but I'm an unabashed Greg Kinnear fan, so I was looking forward to this film. Outside of an episode of "The Simpsons" and For Your Consideration, I'm pretty ignorant of Ricky Gervais's work (wasn't he on some sitcom in the UK?). Maybe I just don't "get" his humor because, while I found the movie charming, it really didn't bring the funny. I like how they play around with the concept of ghosts (sneezing is caused by walking through one), though.

Wanted: Big, dumb, fun action movie, but with faults. Sadly, Angelina Jolie is approaching "bag of antlers" status - get her a sammich. Stat! And I honestly don't mind CGI that much EXCEPT when human characters are extremely fake-looking (Spider-Man/Matrix Syndrome), which took me out of this movie's climactic shootout. People have said that Morgan Freeman possesses the "voice of God," so it was kind of funny hearing him say "motherfucker."
Posted by Micah at 12:07 PM

Clint did an excellent job portraying the racist, old, 1st Cavalry Division veteran, PBR-swilling coot I hope to become. No seriously, it was the best movie I've seen in a long time, even with the amateur cast. I would also submit that Marley is only the SECOND best yallow Lab to appear in a movie in the last year.

I had to resist the urge to call Dickie and Karl rude names today.

Wanted was almost nothing like the graphic novel and thus, sucked ass. The only worthwhile part was the ridiculous warehouse shoot-out at the very end (which solved the Rambo "million round" conundrum with a stylish yet sensible solution.)

Dubin - Were you and Clint's character in the same Division? I'm sure you'll grow into that role in no time.

spydrz - I'm going to Bubba's tomorrow. I'll have to bite my tongue, lest I risk getting a terrible haircut.

SBN1 - I've heard that criticism elsewhere. Having never read the graphic novel, where are they different (besides "everywhere")? And that shoot out would've been killer had the people not looked so obvisouly fake.

I'm in the mood to check out "Shoot 'Em Up" (or whatever that Clive Owen movie's called). Ever see that?

Yes, we were, but not at the same time.

Ah, that's where I was lost.