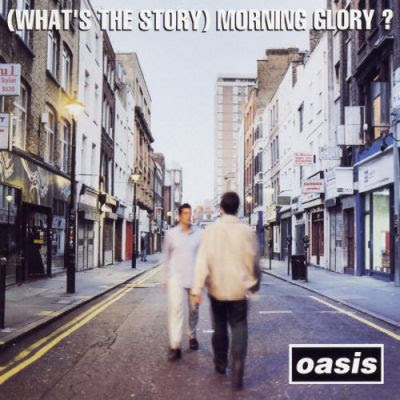 Oasis. Familiar to millions, yet I was never really a fan. Sure, the band's big singles were inescapable, but I never really had the desire to delve deeper into their catalog. I think that the reason for that was twofold: 1) they were (to me, at least) overexposed during the height of their US popularity, and 2) I found them to be a blatant Beatles rip-off - a charge which I'm sure they'd acknowledge, if not embrace.

Which is odd because I'm a huge fan of bands that could be described as "Beatlesesque," like XTC. And as silly as the mid-90s Oasis/Blur War was ("But is not Oasis the greatest British band since the Beatles? Can we not vote on this?!"), I'm also a consumer of Britpop. Heck, I consider Pulp's stellar one-two punch of Different Class and This Is Hardcore to be in the upper echelon of pop music. Their run is even more impressive when you booked end those albums with the lesser-but-still-rather-good His 'n' Hers and We Love Life.

So, as the years passed, the sole entertainment Oasis provided me came from Liam and Noel Gallagher's outrageous and hilarious quotes that popped up frequently in music magazines.

Recently on a message board that I'm a member of, there was a post about how people feel about (What's the Story) Morning Glory? 13 years later. Does it still hold up? Is it considered an essential 90s alternative album?

And that got me to thinking: why not give this band another shot?

So, here are my impressions upon first hearing the album in its entirety:

1. "Hello" Not bad. I see that Gary Glitter shares the songwriting credit on this one. What'd the Gallaghers steal? More than the beat?
2. "Roll With It" Now this is the Beatles cover band that I expected to hear. It's an okay rocker.
3. "Wonderwall" Ah, the big, ever present hit single. I never noticed that there's a string section in this song. What the heck is a "wonderwall" anyway?
4. "Don't Look Back in Anger" Of the Oasis songs that I'd been previously exposed to, this is my favorite. It's got a good melody with an anthemic, sing-along chorus. I can just picture myself at the pub with me mates, belting this out as it plays on the jukebox. Or telly or lorry or crisp or whatever the heck they call a jukebox across the pond.
5. "Hey Now!" Sort of a disappointing follow-up to "Don't Look Back in Anger." We're back in Blah Territory. Not bad, but not all that great, either.
6. "Untitled" (aka "The Swamp Song - Excerpt 1") Interesting, but it'll be excised from my iPod the next time I connect to iTunes.
7. "Some Might Say" I really like the chorus of this song. Oasis, you've won me back...for now.
8. "Cast No Shadow" Apparently, this was written for Richard Ashcroft. Meh. He can keep it.
9. "She's Electric" The best thing about this song is the shuffling (yes, Beatlesesque) beat. The melody doesn't really do much for me, though.
10. "Morning Glory" Pretty cool intro. I imagine that this song is pretty good live.
11. "Untitled" (aka "The Swamp Song - Excerpt 2") See my comment for track #6.
12. "Champagne Supernova" This is a fitting epic closer for the album. These boys sure do like their drugs, don't they?

In all, I find it to be just like many other albums that strike a chord with the general populace: a knock-out tune or two ("Don't Look Back in Anger"), a handful of strong songs ("Some Might Say," "Morning Glory," "Hello"), and the requisite filler (the untitled songs, "Hey Now!"). I hear from trusted sources that Oasis's debut Definitely Maybe is superior to this album and that some of the best songs from the Morning Glory sessions are, in fact, B-sides. I intend to seek those out next.

Personally, I think nostalgia is influencing those calling (What's the Story) Morning Glory? a classic. But I'll be the first one to admit to doing the same thing. After all, I think the Soup Dragons' Lovegod is required listening, simply because it was the soundtrack to my high school years. And also because it's totally awesome.

Note: Originally, I planned on (Re)Evaluation to just be dedicated to rewatching movies that I didn't like originally (and their sequels), but I believe that to be a way too limiting subject. So, from here on out, it's going to be a place for me to evaluate any media (popular phenom level or otherwise) - movies, books, movies, TV shows - that I either initially missed the boat on or disliked upon release.
Posted by Micah at 1:59 PM

Speaking of Beatlesesque bands...You ever give much attention to Dr. Dog? The song on my Best of '08 is very Beatlesesque. Pretty good stuff. As for Oasis? I give it a solid 'Meh' on the scale.

And I thought the Champagne Super Nova song was about a gold colored 1966 Chevrolet show car.

"Classic" status?...depends on one's implication in the word classic...If by "classic", you mean it's in the same category albums like "Revolver", "Electric Ladyland" or even more recently,
"OK Computer" or "Appetite for destruction", then I would say no.,,However, if by classic you mean that history will prove it to be as relevant to its time as it was to its fans during its time, then I think so...

Still though, I thought "...Morning Glory" was pretty good, not great, when I bought it back then. Everybody was flipping over it, and I remember having somewhat more of a tempered response to it...I think where people miss is ascribing the whole album a certain status, whereas I would say that the three biggies ("champagne", "wonderwall", and "don't look back") are absolutely classic tracks on an otherwise decent album...

and, yes, if memory serves "Definitely, maybe" is better as a whole.

This album was good, but their first was better. They'd already broken through in the UK and were household names by the time WTSMG was released. Most folks here (at least the ones I knew) had no idea that this was their second album, thus all the ridiculous (secondhand) hype. It helped that the brothers knew how to stay in the press. I haven't listened to either album in years, but if I recall you can listen to them side by side and more or less see the"framework" that Noel use when putting the album together. That is to say, it's as if each track has a twin on the other album.

I think both DM and WTSMG are probably going to go down as classics in the UK though perhaps not here in the USA. It's a homegrown product and meant much more to audiences there. Much like Pulp's Different Class would be regarded as a classic over there but most people here would just say, "What? Who?" Go look at the crowds from Glastonbury from, say, 1994 or 1995...they are, as the brits say, "mental." a massive throng of people singing along word for word, pogoing, and clapping. This music was by their own folk, for their own folk and it meant something that a lot of us yanks couldn't fully grasp. I'll tell you what though, to this day I still sing "Common People" in the shower.

Now, when are you gonna review that album by The Dambuilders?

i pull this album out about once a year and give it a spin and somehow i always seem to be cleaning my pussy's litterbox when i do. so thats my association with this album, scooping cat poo. i always think this album is in the 'okay' range, and yet i keep coming back to it, even this many years later. impressive considering the majority of albums i get never make it past a 2nd listen.

Story was out before the radiohead album in the comments above so their argument about being judged by it's placin time is redundant as not enough time has really passed ....