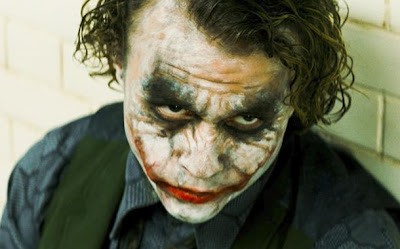 1. The Dark Knight: Way to go out on a limb there, Micah. But really, this is an all-around great film. Going in, I was skeptical of the Heath Ledger hype, but his performance was excellent and cemented the movie's place at #1.
2. Iron Man: I wrestled with the idea of having this take the top spot because it was the most fun I had at the movies in 2008. If there was any justice in this world, Robert Downey, Jr. would be nominated for Best Actor.
3. Forgetting Sarah Marshall: Getting dumped has never been so funny. And for the ladies: copious amounts of dong.
4. The Incredible Hulk: A vast improvement over the previous Hulk movie, thanks to Edward Norton's Bruce Banner and having the big green guy actually, you know, smash stuff this time.
5. Hellboy II: The Golden Army: Guillermo del Toro creates a fantastic world and everything is improved from the prior film (CGI, humor, acting, etc.). I still maintain that Ron Perlman's Hellboy is the best character to make the comic-to-film transition, visually at least.
6. Step Brothers: The last act lags a bit, but the first 2/3 is hilarious, if you dig Will Ferrell's manchild shtick (I do). My nomination for the best actor to go from serious drama to wild comedy: John C. Reilly.
7. Tropic Thunder: While it wasn't as monumental as it looks on paper (STILLER! BLACK! DOWNEY, JR.!), it still did bring the funny. From here on out, can we just put Robert Downey, Jr. in every movie?
8. Zack and Miri Make a Porno: Elizabeth Banks' face during "the scene" alone warrants inclusion on this list.
9. Rambo: Finally, an 80s action film for the new millennium. Buried under the layers of blood and testosterone is an actual message, too.
10. Indiana Jones and the Kingdom of the Crystal Skull: Nix the sci-fi junk and Shia Lebouf swinging on vines, and it's not that bad of a movie. And let's be honest: nothing that Spielberg, Lucas, and Ford produced could live up to the years of anticipation.

I'm not in the target market, but I enjoyed it anyway, dammit: Nick and Norah's Infinite Playlist

*That's my official entry in this year's Gene Shalit Review Impersonation Contest.
Posted by Micah at 11:04 AM

Eh, I don't know about that. But dude, have you heard about Stallone's upcoming movie The Expendables?

That shit is going to rock my world.

well, at least no one can accuse you of being pretentious with this list...

It takes just as much talent (maybe even more so) to make a funny comedy or an exciting action flick, yet drama seems to be the genre that gets all of the respect.

Rambo killed an entire division of the Burmese army. I think that puts it ahead of Forgetting Sarah Marshall.

i'm all about a great comedy. i haven't seen any of the ones that you listed this year, but somehow, i'm just less than enthused by this year's comedic selections (w/ the exception of wall*e, which was kind of a silent comedy).

i did like dark knight and iron man, though.

Pineapple Express was a brilliant and underrated action-comedy.