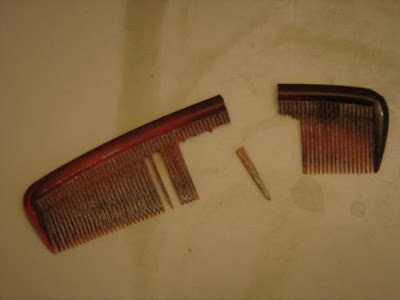 Picture it: London, March 2001. I check into a hostel that reeked of wet towels, only to discover that I had left certain necessary toiletries back in the States.

Undaunted, my friends and I go to the chemist and I check out its selection of combs, among other items. One immediately caught my eye: a small, tortoiseshell model, packaged with a similar black one. They was the right price (cheap!), so I bought them. For the rest of the trip they performed swimmingly.

I was so impressed with how the comb handled my dark chestnut tresses, that I made it my primary comb. Over the years it has served me well, but in the last few months the comb has steadily been losing its teeth. But it soldiered on, taking whatever I threw at it.

Unfortunately, this week it broke and lost most of its functionality. Is it any coincidence that this horrible event occurred the night before I had my first haircut since Thanksgiving (yes, I felt like a dirty hippie)? Rest in peace, old friend. I am forever grateful for your years of service. Some may claim that British steel is the pride of that land's manufacturing industry. While that does indeed rawk, I contend that it is in fact comb production that should receive the accolades. The sun still hasn't set on that part of the Empire.

I have a vague idea of where I put the tortoiseshell comb's black partner, but I'm not completely certain it's there. Unfortunately, I fear that I'll have to resort to replacing it with an inferior, likely toxic comb produced in Red China. *sigh*
Posted by Micah at 11:52 AM

Well I *do* want to go see Hohenschönhausen. I didn't get a chance last time I was in Berlin.

After the Iceland trip.

damn. i bet i havent used a comb SINCE sometime around 2001. anyway, sorry about your comb.

British Steel is also one of Judas Priest's finest albums. But my condolences on your combs.