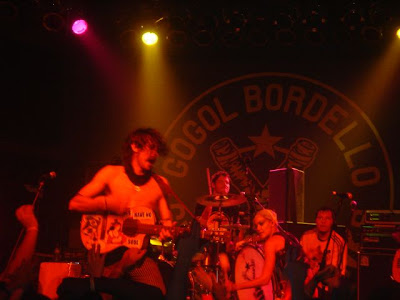 Last night I went to the Gogol Bordello show at Toad's Place. Anaheim's Dusty Rhodes and the River Band opened up the show with the appropriate amount of energy. The lead singer (Dusty Rhodes? Lucky Day? Ned Nederlander?) looked like a young Jeff Lynne sans the sunglasses. I particularly liked their cover of the Band's "The Weight." Also, the violinist/mandolin player is pretty cute.

Gogol Bordello took the stage at around 10:15 with a manic fury. I swear, they replace Flogging Molly as the most energetic band that I've seen live. If this Gypsy punk band doesn't alter their Raisin Bran to have two scoops of amphetamines, I'd be surprised. They simply didn't stop except briefly at about an hour in, when bandleader Eugene Hütz finally addressed the crowd...by referring to us as Charlottesville. Is it any wonder why the humor of This Is Spinal Tap endures to this day?

After some brief banter, they jumped back into the music. While they are great at what they do, honestly each song sounded pretty much alike. There wasn't much variety at all. Plus, I have never heard a band draw out and milk the endings of their songs so much in one show. That's a fine thing to do a few times, usually at the very end of one's set. But almost every song was like The Return of the King. Just when you thought it was over, it would keep going, then stop, then continue, then dissolve into a super jam.

Despite my above criticisms, I had a great time. If Gogol Bordello rolls into your town, definitely go see them. They certainly give you quite the bang for your buck (a SIX SONG encore!).

An aside: a game that my brother and I like to play when we go to concerts is "What Celebrity Does This Person Look Like?" In attendance last night: Fred Durst, Rivers Cuomo/Hipster Daniel Plainview, and Vaguely Asian Young Morrissey. It's a fun game. Try it.
Posted by Micah at 10:45 AM

Who are these "celebrities" of whom you speak?

Perhaps you aren't in the target demographic for this blog (i.e. pop culturally aware). :)

What?! I've heard of Skynyrd AND Boston.

Then you should just browse my blog's archives from 1976.

I play that celebrity look-alike game, only it's at strip clubs instead of concerts

So, do you do that with the talent, the patrons, or both?