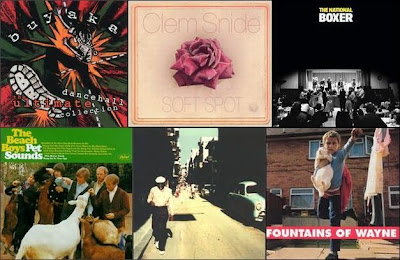 I could list dozens of albums to carry you through the summer months, but I figured that all you really need are six. These are some of the albums that I repeatedly go to once June rears its ugly head.

Buyaka: Ultimate Dancehall Collection I'm not a huge fan of dancehall reggae, but my freshman year roommate would play this a lot and it really takes me back to my college years. Everyone needs just one dancehall compilation in their collection and this is the one to get.

Clem Snide: Soft Spot Singer Eef Barzelay's voice is definitely an acquired taste, but this country-tinged album - ruminations on why the world is a good place, dedicated to his wife and newborn baby - is clever, low-key, and beautiful. "Summer will come with Al Green and sweetened iced tea/Summer will come and be all green with the sweetness of thee". That pretty much sums it up.

The National: Boxer These guys have produced the quintessential album to be listened to on summer nights while sitting outside and enjoying the vice of your choosing. Lush and orchestral, the music hangs in the air like the smoke of a mellow Cavendish.

The Beach Boys: Pet Sounds Really, at this point there's not much more you can say about this absolute masterpiece. For extra credit, get the boxed set and see how it all came together.

Fountains of Wayne: Fountains of Wayne Once you're done with school, the realization that the next 40 or so summers no longer belong to you can be a hard slap in the face. Fountains of Wayne make music for us cubicle dwellers. This is the sound of throwing off the necktie and hitting the road at 5 pm.
Posted by Micah at 2:28 PM

A fine album, sure, but I don't associate it with summer.

Just different associations. I'm sure there are people who wouldn't identify some of the albums that I posted with the summer (although the people who make that argument about Pet Sounds are out of their gourds). It's just one dude's opinion, that's all.

Now, if I were compiling a list of Road Trip Albums, then Boston might make the cut.

1. "Once you're done with school, the realization that the next 40 or so summers no longer belong to you can be a hard slap in the face."

...unless youre a teacher. then and only then, life becomes beautiful again. i keep telling you - look into it...

2. interesting you associate BVSC with summer. to me its the sound of steamy summer nights, and thats why i listen to it year round...to try to capture that feeling at will.

3. no buffet? my god, youre a communist. the "boats" disc of his box set is one of my alltime fave compilations. damn dude, those songs ARE summer.

1. Yeah, that's definitely a notch in the "pro" column for that occupation. We'll see.

2. For some reason I played BVSC while grilling out on the deck at 315 and it just clicked. The whole summer, that would be the only thing I listened to while cooking out.

3. Oh, Buffett's on the list, most definitely. He was just kind of obvious, so I let some other albums shine. Not that Pet Sounds isn't obvious or anything.

Fruitcakes would be the non-compilation album I'd pick by him.