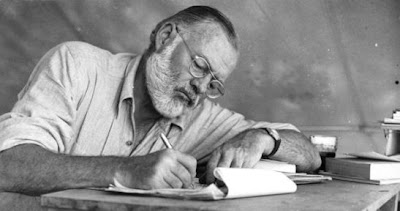 To Have and Have Not by Ernest Hemingway This is the story of a fisherman who has to turn to smuggling just to make ends meet. I think that this summer I'll rediscover my favorite bipolar, suicidal, alcoholic writer (no, not Judy Blume).

Don't Stop the Carnival by Herman Wouk It's kind of like a Caribbean-set "Fawlty Towers" (and it's been turned into a musical by Jimmy Buffett!). Funny stuff.

Parliament of Whores by P.J. O'Rourke It is an election year, so why not bone up on how the federal government really works?

A Cook's Tour: Global Adventures in Extreme Cuisines by Anthony Bourdain The beach is hot; so is a kitchen. But only one gives you food (odd and sometimes disgusting as it may be).

When You Are Engulfed in Flames by David Sedaris This just came out and my copy is on its way, so I can't pass judgment on it just yet. But I have yet to read a Sedaris book or magazine/radio piece that I didn't like.

My Custom Van: And 50 Other Mind-Blowing Essays that Will Blow Your Mind All Over Your Face by Michael Ian Black I saw him read a few of these essays at a show he did here in Richmond earlier in the year and they were pretty funny. I'm really looking forward to getting this. Side note: I bought a copy of State by State with the State when it came out and now I see that it is fetching between $70-$122 on Amazon Marketplace. Keep the book, dump it now, or hang onto it in hopes that it'll fund my retirement?

Sometimes you just don't want to put forth the effort to read. I can get the same way. When you are feeling like that, here a couple of audiobooks for when you are stuck in your car or the Metro or are just plain ol' lazy:

Me Talk Pretty One Day by David Sedaris His books are great, but I think he shines on his audiobooks because you can hear what words he emphasizes and inflects, not to mention the funny character voices and his hilarious Billie Holiday impersonation.
Posted by Micah at 10:40 AM

So....um...don't be offended, but I thought of you today when I saw these:

Oooooooooookay. Not sure how I triggered that reaction, but I'm flattered. I guess. :)

Those shoes are pretty cool in concept, but boy are they fugly. I do like the tablecloth pattern inside. That's a nice touch.

yah, sedaris. although i think i tend towards fiction in the summer (trying to relax my big fat brain so that it can think again come fall).

You mean you don't read textbooks over the summer?! You are seriously making me disillusioned in regards to teachers.