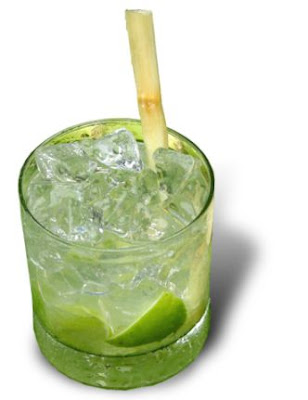 If you need any excuse to drink, the exhausting heat of summertime is as good as any. And nothing compliments sunstroke and dehydration like hooch. The following are some of my favorites to turn to when the temperature rises. Not all of them require a tiny parasol, but it helps.

Caipirinha This Brazilian libation is my favorite summertime drink. It may be a bit hard to find - especially when it is made with a sugar cane stalk like it is supposed to be - but it is worth it when you do. Luckily, cachaça (a rum-like alcohol used in this drink) isn't too hard to locate, so it can easily be made at home.

Mojito It's like Orbit Mint Mojitio gum, but in liquid form. And with booze.

Captain Morgan & Ginger Ale: I prefer to use diet ginger ale in this concotion. For some reason, when you mix these two disparate ingredients, it tastes vaguely cream soda-ish. Strange, but refreshing.

Mali-Dew: I invented this cocktail in college. Basically, it's equal parts Mountain Dew and Malibu rum. I haven't had one of these in years, but I think this is the summer to bring it back.

Red Stripe: Hooray beer! This is probably tied with Leinenkugel Sunset Wheat as my favorite beer. I think a man workin' outdoors feels more like a man if he can have a bottle of suds. Specifically, these two.

Redstone Vanilla Beans and Cinnamon Sticks Mountain Honey Wine You want something nice and sweet for after a fine meal? Turn to mead. It's the future. Be ahead of the curve.
Posted by Micah at 11:03 AM

I had a $12 Caipirinha in DC the other week. It was terrible, strong and expensive, so I made myself drink the whole thing. WHOO! That's a strong drink!

Welcome to DC. Everything in that town (and the outlying areas) is expensive. That's one reason why I left. I don't remember exactly how much the Caipirinhas that I've had here in Richmond (at the Brazilian steakhouse) cost, but I imagine they are $6-$8.

I made my own last summer.

The mere fact that you left the Mint Julep off of your list...the veritable KING of all seasonal cocktails...makes me doubt your authority to make a list like this.

i KNEW coleman would have to say something about the julep.

if you are in DC, you should head to Hudson Restaurant to try their caipirinhas with interesting variations. They are awesome and worth the price. you will definitely not have to force yourself to finish it!

Sorry, but I doubt you invented the MaliDew. I have enjoyed it for years while rafting the Truckee River at Tahoe City, CA. I thought I had invented it and even bartenders on my float trips didn't know about it. Today I did a Google search and found 5.5 million hits. Many, like you, claim to have invented it. I wonder how far back it really goes?
Don't feel bad, apparently many of us all believe we invented it. In a way we did; we made it with prior knowledge.
I consider it a poor-mans Midori and 7.

oops! ..."WITHOUT" prior knowledge.