At least the empty bar stools will have clean air 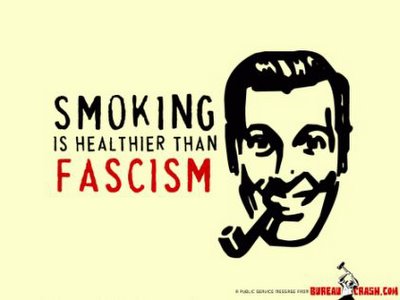 Thanks to Bureaucrash for the graphic.

Columbus's smoking ban turned one year old yesterday and an anti-smoking zealot-funded study* trumpeted the improvement in the city's air. Funny how there was absolutely no mention by the Nanny Staters on how the economic impact of the ban. If I were in their shoes (and thank Allah I'm not - what a life devoid of pleasure), I would definitely have commissioned a study on whether or not bar and restaurant business had grown, for PR purposes if the conclusions were favorable. Could it be that business held steady or went down in the past year and they are sitting on such a study?

Less than a mile north of yesterday's news conference, smokers legally puffed away at Champps, a restaurant in Clinton Township.

That has meant $32,000 more business, said Champps General Manager Tim Klunk. "That's monstrous for us." Business is up 6 percent compared to the same time before the ban.

So, I guess smoking bans are good for the economy...of neighboring towns that don't infringe on property rights.

On a related note, here is the story of a Newark, OH, restaurant owner fighting her city's smoking ban.

Disclosure: I abhor cigarette smoking, but I do indulge in the occasional cigar or pipe.