I've spent part of this holiday weekend brushing up on some Executives (I'm a dork), watching documentaries on Thomas Jefferson and Teddy Roosevelt. I half expected one of my law professors to be featured on the former, considering how much on TJ's jock he was. I have one left to watch: Ronald Reagan (this doc was produced by CBS News, so I'll have to take it with more than a few grains of salt).

Speaking of the Gipper, here's my new shirt: 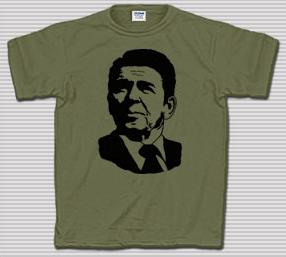 Thanks to Spydrz for clueing me in on its existence.

Most of my enjoyment of wearing this shirt is pissing off those trendy so-Che-lists (who ironically betray their Hero of the People's Marxist ideals with every t-shirt purchase). I'll get a kick wearing it to the premiere of Steven Soderbergh's upcoming Che Guevara lovefest (I assume).
Posted by Micah at 9:20 AM

The question is, who will be kicking you? :)

i'd love to see a full-blown riot at some of these faux-hippie fests.

maybe we could do cartoon caracatures of Che!

Kate - I'm sure my peeps would have my back.

jasdye - I don't think it'd work. The only thing that would make them turn to violence would be if we put a stop to their munchie supply. Or shut down their nightclubs, coffeehouses, alternative bookstores, etc.

I see that Ryan Gosling will be in Soderbergh's film. Can someone please cue "Lazy Sunday"?

P.S. Everyone knows that Rocky Balboa and The Wolverines ended Communism. Reagan was just an old man in a suit.

The Wolverines? And here i thought it was Captain America!

It's a holiday weekend? Oh. For the government workers.

Wow! I finally knew something pop culture related before Micah! I think that calls for a lunch at the original Wendy's. Number Six, with a caesar side salad, please.

THSE & jasdye - You're both right. It was a coaliton of Captain America, Rocky, and Patrick Swayze's high school militia that brought the Kremlin to its knees. But don't underestimate the intelligence gathered by Chevy Chase and Dan Akroyd.

spydrz - And for temps!

Hey, the lunch offer prize stands. You slags just have to make it up to Columbus to pick it up.

Dammit, Spydrz you never have and never will win an Oscar pool. Just because the numbnuts at Yahoo! inadvertantly listed you as #1 for like 8 minutes does not mean you won! That distinction does to the little guinea in NY who is--quite frankly--spooked at the prospect of Micah Google-Earthing his residence.

Back on topic: in order for you to win an Oscar pool, you'd have to off KPMD, Micah, and I Jack Bauer-style. Hell, you picked Good Burger to take Best Pic last year. A bold choice, I admit, but a wasted one at that.

heck, i think i'd choose Good Burger over the loser pix this year!

I think my record speaks for itself.