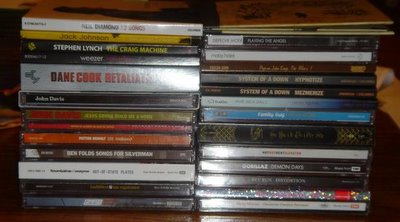 Considering that each year roughly 31,000 albums are released (no joke), there is no way I can hear them all. And some that I want (LA Symphony) remain unpurcashed/unstolen. But of the ones that I did listen to in 2005, these are the tops:

I have...absolutely none of those albums. I guess I've fallen off the cool wagon. I did get the Johnny Cash 1950s boxed set.

You are supposing that you ever were on the Cool Wagon to begin with. :)

Hey, I saw Sideways in the theater.

Thx for teh free isht!

Hey, you're the only one that ever takes me up on the "free music" stuff. I should've just e-mailed them to you. :)

this is the guy who recommended 'brian wilson presents smile', right?

spydrz, you don't wanna be on this guy's cool wagon.

ps., thanks for the heads-up on pj there.

I am itching to get Jack Johnson. I heard him again on the radio, and he sounds like a vacation.

jasdye - I stand by all of my picks. SMiLE was last year's best. After two mediocre-to-bad albums, Depeche Mode's latest is a strong return to form. Kind of the same with NIN (didn't really care much for The Fragile). And Neil Diamond? Destroy everything you thought about him.

I meant to add Common's Be and Sufjan Stevens' Illinois to my list of albums that I really want to hear, but haven't yet.

And I am completely on ?uestlove's jock. If I was to assemble a supergroup, he'd be the drummer hands down (ahead of Keith Moon and John Bonham). I have high hopes for the Roots' disc this year.

Speaking of high hopes, PJ's disc did not meet expectations. He also has one coming out this year, so we'll see.

KtG - That's an apt description. When he first came onto the scene, I dubbed him "our generation's Buffett" (only less cheesy). Maybe I'll throw a disc together for you or something.

I loved the NIN album. and that Jack Johnson video. I don't think I've heard any of the others.

by the way, I had to move my blog (so far, so good) to the following address:

ignore the boring template. I'm in the process of changing it. hope to see you there :)

i don't have Be yet. neil diamond, maybe. maybe not.

i'm glad i got Smile. it's one of my favorites.

sufjan's though, is my favorite from last year, period.

and you're right, ?uestlove is the stuff, and then some.