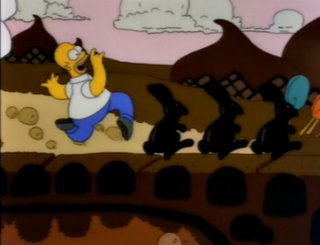 "It's time for us to rebuild New Orleans - the one that should be a chocolate New Orleans." - Mayor Ray Nagin
Posted by Micah at 12:38 PM

i'm guessing this has something to do w/ the wealthy people trying to restructure new orleans again (evil) and the mayor saying something (stupid) again, further giving the haves more excuses to take from the have-nots.

jasdye - Possibly. And the cynic in me would also say it's a plea for his voter base to return to the city.

Here's a video of his explanation. So, let me get this straight: to make chocolate, you start with chocolate?

I swear, if he gets re-elected, the people of New Orleans will be giving DC residents a run for their money in the Stupid Voters category.

hey, i live in chicago. the Machine still lives, buddy. it's all just politics and whose street gets plowed after the blizzard (or raised after the hurricane).

Ah, Chicago - where the dead rise from the grave and vote Democrat.

Please don't tell me he really made the chocolate reference.

That man is an idiot.

Our motto:
Chicago Works, for those who vote the right way, ya know'i'mean?

Our catchphrase is actually:
Chicago: where the dead rise from the grave and vote often.

KtG - You're a TV news producer and you haven't heard this story? Sheesh! There's a clip of it on the site that I linked to a few comments up.

that's so eighties. we'll all about synergy now.

Oh, so the city goes for a cross-promotion with the Blackhawks or Bulls, then? Or do they go the more corporate route: "Remember to vote on Wrigley's Chewing Gum Election Day."

blackhawks and bulls? no, sirree. we only go for winners here.