Crush of the Week: Lindy Booth

This week's Crush is actress Lindy Booth. She was in the Dawn of the Dead remake, but was recently brought back to my attention from her starring role in the teen thriller Cry_Wolf. 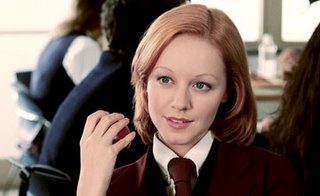 I received the Cry_Wolf DVD for Christmas because it was filmed at my alma mater (the University of Richmond), which is its biggest asset, if I do say so myself. The movie itself is so-so, but looks really great for having only a $1 million budget. And even though Lindy plays a prep school girl, her being a Crush isn't as creepy as it could be since she's actually 26. Loves me the redheads.
Posted by Micah at 12:45 PM

What's with all these cute actresses of late being Canucks?

Must be something in the water. Or ice farther up north.

Awww, Micah, is that why you're always so nice to me?

Yep. That and the whole "Jew thing."

My verification word for this post is "yrnkd." "You're naked"?

Last I heard, she no longer lives in the Ontario area.
Sooner or later, they all end up in Southern California.
Lucky for me I guess.