Spiders gonna work it out 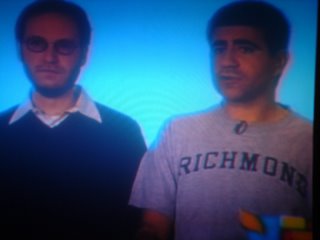 There's a University of Richmond revolution going on. On last week's episode of "Best Week Ever", Michael Aboud (one of the Modern Humorist guys) wore a UR t-shirt. How do I know it was a UR shirt and not one trumpeting some other "Richmond"? Because I have the same freakin' shirt (same font and all)!

Pardon me for thinking this is newsworthy, but unlike other schools (say, Harvard, NYU or UCLA), my alma mater doesn't get much pop culture media attention (aside from the backstory on "Commander in Chief"). Go Spiders.

Hey, Michah (sic). John Aboud here. I grew up in Richmond, but I didn't go to UR. Thanks for watchin'.
-John

So, there you have it. Because of his wearing of the shirt on national TV, his humorous contribution to pop culture commentary, and his response to my e-mail, he is the inaugural member of the Micah World Cool People List.
Posted by Micah at 8:53 PM

Email ThisBlogThis!Share to TwitterShare to FacebookShare to Pinterest
Labels: Cool People, TV, UR

It's "Forty Thousand Dollar Per Year Tuition And Over" month on VH-1.

I'll go ahead and make sure you get another copy of that memo.

spydrz - Thanks. My inbox has been cluttered lately and it must've gotten lost in the shuffle.

Man, I don't have that shirt. Sadly, after my tuition and expenses were paid in full, I found myself $10 short.

Granted I don't wear the shirt, but I contribute to pop culture commentary in a humorous manner, and I often respond to your e-mails. So why am I not a member of the Micah World Cool People List? Is it because I'm a Greaseball Dago Wop?

Ditto for the Irish.

this cat's got too much time, don'tcha think, to go googling himself on a reg basis.

i don't think he's that cool.

Actually, I e-mailed him asking about his Richmond connection. Who's got too much time on his hands now?

Boriquas are just fine by me. I got a thing for Latina women.

sorry, i'm not much of a woman.

But surely you can hook me up with some.