"The kids don't wanna hear some weirdo book that your Nazi war criminal grandma read to you." 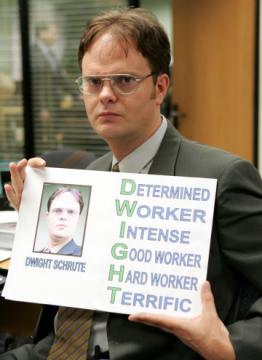 Some great news for fans of "The Office": this summer NBC will produce 10 internet-only episodes of the Best Comedy on Television (hey, I lurve "Arrested Development", but facts is facts).

And if you didn't catch it, last week's episode - "Take Your Daughter To Work Day" - was freakin' hilarious. Go to iTunes and buy it. Or download it illegally.

"Listen, I like kids. But this is not a kid's environment, this is like HBO. No limits. Who knows what I'm going to say? Crazy stuff. And it is R-rated. It is not rated G. I am like Eddie Murphy in 'Raw', and they are trying to make me into Eddie Murphy in 'Daddy Day Care'. Both great movies, but still."

"Kelly and I both agreed that we would both have fun, and I'm learning that fun for Kelly is getting married and having babies. Immediately. With me."
Posted by Micah at 10:35 PM

This is extremely exciting news...and I agree with you 100% that this is the funniest show on TV. Anyone who doesn't think so...well...the word "Lame" comes to mind...

the Fundlebundle tape had me dying. actually, Michael's reaction to what he had said as a child had me dying.

Mags - Thanks for having my back. I think the mark of an excellent show is that I will record it and watch it multiple times before the next episode. Which is what I do with "The Office".

THSE - Yeah, that was hilarious. Even funnier was the puppet's blank stare after what child Michael said.

"i want to have a hundred children so that no one can say no to being my friend ever again."

HI-larious. we need to see michael on a therapist's couch, just a couple of times. (if he goes any longer, that'll be the end of the show as we know it.)

Bwahahahaha! I am howling just thinking of that isht again! Painfully awkward moments like that Fundlebundle incident are when this incarnation of The Office mirrors its UK predecessor, but in a style that is distinctly American.

jasdye - Naw, it's much funnier with Michael being so clueless as to how he's viewed by others.

THSE - I remember all of the fans of the UK version writing the US version off before it even debuted (rightly so; see "Coupling" US). Nice to see that it has come into its own.

I checked out the UK version from the library a couple of years ago, but didn't really take a liking to it. Maybe I should give it another chance sometime.