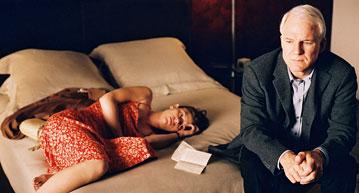 Shopgirl: Steve Martin goes dramatic a la Bill Murray. And I loved it.
The Chronicles of Narnia: the Lion, the Witch, and the Wardrobe: I've never read the C.S. Lewis stories, so I went into this erotic thriller fresh and was thoroughly entertained. Aslan's supposed to represent Buddha, right?
V for Vendetta: Didn't love it. Didn't hate it. 99% of the time Hugo Weaving's V speaks behind a non-moving mask, which reminded me of the silliest part of Spider-Man (when Spidey and the Green Goblin have their conversation).
In Good Company: I meant to review this last year when I first caught it on DVD. It was completely mismarketed as a romantic comedy. The movie's actually about the conflict between an aging magazine exec and his much younger boss. You should see it simply because it stars Scarlett Johansson (which is a good enough reason to see any movie of hers).
Running Scared: VERY brutal, but entertaining. It contains one of the biggest "WTF?!" twists that I've ever seen. The best review comes from comedian Patton Oswalt:

"I saw RUNNING SCARED last week. Although I don't exactly feel like I 'saw' it. I feel like it yelled at me for two hours and the crushed by balls with a can of baked beans.

Have I mentioned I loved it?"

(Check the link for a funny anecdote about a couple that walked out of the movie.)
Posted by Micah at 11:53 AM

I would have to argue with you about your Scarlett Johansson comment. I believe there is not enough hotness in the world to make "The Island" worth my time. But, maybe that's cuz I'm a chick...

KPMD - Okay, maybe you have a point, but your lesbian tendencies haven't fully surfaced yet.

Kate - You don't remember that scene where the White Witch is being interogated by the Professor and she slowly uncrosses her legs. Later on in the film she kills Mr. Tumnus with an icepick.