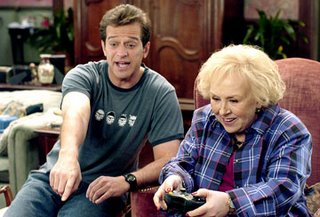 Grandma's Boy: A not-so-guilty pleasure of mine is a good, stoopid comedy (Super Troopers, Eurotrip, et al.). Despite factors in its favor (Nick Swardson*, Linda Cardellini, producer Adam Sandler, a premise that illuminates my very soul) this one was just dumb. I just don't find stoner humor funny. But it gets bonus points for having boobage and a chimp in it.
King Kong: Way too long, but I dug it. The man-woman-large ape love triangle was a bit creepy, though.
The Amityville Horror: Pointless remake that didn't bring the scary. Ryan Reynolds was surprisingly decent in a non-comedic role.
The Producers: I've never seen the Broadway production, but I can imagine Broderick and Lane's performances were exactly the same, as they really played to the balcony. It could've been toned down a bit. Uma Thurman was miscast, since the blonde bombshell role of "Ulla" should be played by someone, well, attractive.

*Hopefully his "Gay Robot" TV pilot will see the light of day.
Posted by Micah at 3:50 PM

jasdye made my brain hurt

No, she ain't. Of everyone that Hollywood shoves down our throats as "beautiful", Uma ranks last. I just don't think she's attractive.

I'd still do her, though.

I would have to say Uma ranks above Sarah Jessica Parker. I just can't get into her. Sometimes I can see the Uma thing. Not often, just sometimes.

Very good call. To quote Peter Griffin: "They let Sarah Jessica Parker on TV and her face looks like a foot."